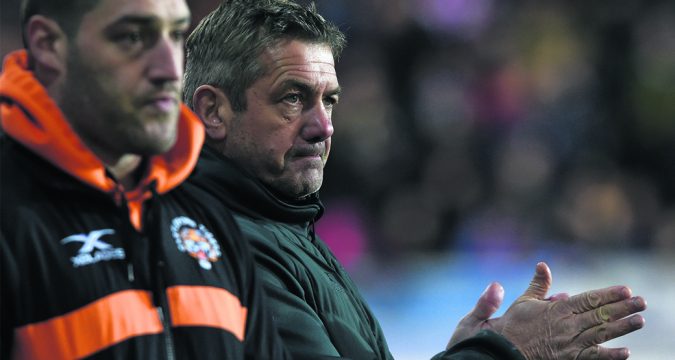 Daryl Powell has confirmed he will not be joining the England backroom staff – as he also confirmed the club have sacked suspended fullback Zak Hardaker.

Powell has confirmed the story which appeared in Monday’s League Express, which reported that he had rejected a role as part of Wayne Bennett’s support staff.

It is believed that Powell was offered a two-year deal to become Bennett’s assistant, with the possibility of him then succeeding the Australian after that.

However, the Castleford coach has admitted the timing wasn’t right to join England – but he would be open to doing so in the future.

“I had a conversation with Kevin, and at this point it’s not the right situation for me. I’m pretty happy doing what I’m doing here, and I need to focus on what we need to get right here. Ultimately at some point in the future though, I’d like to coach England.

“It just wasn’t right for me, but as I say, I won’t go into any more detail. I’ll always wish England the best because they’ve been a big part of my rugby league career, but the time just wasn’t right.”

Powell also offered an interesting update on the situation concerning Zak Hardaker amidst fierce speculation he is set to sign for Wigan.

The fullback is still awaiting an official suspension from UK Anti-Doping after failing a drugs test for cocaine late last season. However, that has not stopped suggestions he will be signing with the Warriors upon the completion of any ban – and Powell has suggested the path is clear for him to sign for someone else, after admitting he was sacked by the Tigers.

When asked if he was still under contract at Castleford, Powell said: “No, he’s not under contract with us because he was sacked, having done what he’d done. I’ve got no comment on that but I don’t know why clubs would be talking to him at this point because they haven’t even decided what ban he’s going to get. I’ve no comment.”