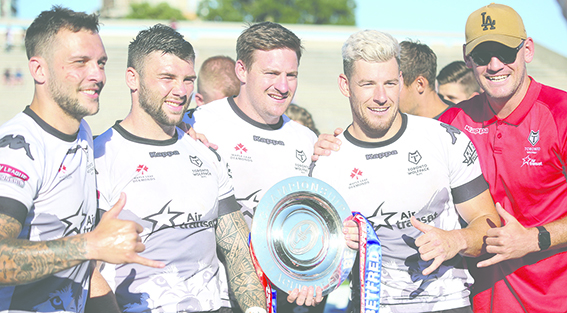 The man behind the Toronto Wolfpack swaps a suit for a baseball cap and the boardroom for the beer gardens. You’re far more likely to see him with a bunch of fans in onesies than you are his big-wig counterparts from travelling clubs.

But don’t let his appearance or laid-back approach deceive you. The 57-year-old is a visionary, as proven by his position as the owner of sport’s first-ever trans-Atlantic franchise. But his plans for Rugby League don’t end in Toronto.

Argyle hopes Toronto can be the start of a rugby revolution. On Sunday the Wolfpack have the chance to secure their place at the top table just two years since formation, but it’s what they’ve done away from the field that has caught the eye.

They have their own reality show, significant broadcast deals that see their games accessible in 115 million homes across four different continents, attendances that far surpass many of Super League’s most illustrious clubs, and that’s all within two years.

But for Argyle, the vision isn’t just for Toronto. It’s for the sport as a whole.

Rugby League finds itself in survival mode. Short-term decisions are often preferred for long-term thinking. It can often be out of necessity, however, Argyle wants that to change.

“We have to grow the sport together,” says Argyle, who made his millions in the mining industry.

“There is a strategy but we have to execute it. We have to increase the eyes on the broadcast. We have achieved a lot, we’re on three channels in Canada, we’ve got 11 Sports which is ultimately a channel owned by ATAT in the United States, Setanta in Asia and Fox Sports in Australia.

“We are broadcast into 115 million homes, I’m not saying they all watch us but that’s a great platform. Once you create that awareness people will start picking it up. We’ve got to get the platform correct, if you get that, the product will engage sports fans. We’ve got to grow the size of the pie.

“The sport is easy to watch at the right time now, especially in the Eastern seaboard. There are 1,900 colleges in the United States with rugby programmes, let’s make sure they’re fully aware of the RFL, Super League and Toronto and what we have to offer them.”

Despite Argyle’s intentions, scepticism of his franchise runs like wildfire through the sport.

There are many who don’t see the benefit of a franchise in North America. Should they reach Super League on Sunday via the Million Pound Game, the scrutiny will only increase.

“I think the scepticism is well-founded,” Argyle accepts.

“It should be open to lots of debate. Hopefully we can settle the debate by the achievements to date on the field and off the field. The city is fantastic when people feel it and taste it, it’s very different from reading about it. Seeing is believing, we highly encourage people to come over and have the holiday of their life.”

Either way, Argyle’s aspirations won’t be defused by cynics. Toronto are here to stay, and they only plan to expand.

Plans are being put in place to create their own school’s programme, with Argyle’s end goal being a Toronto team regular turning out Canadian players, with their pathways eventually providing a larger player pool for other clubs across the goal.

Their global ambassador’s scheme, which currently has supporters from 40 different countries spreading the Wolfpack gospel, is set to expand to 90.

Should they make Super League, they plan to take some of their home games across Europe, with Dublin and Copenhagen two potential locations.

But to fulfil his aspirations, Argyle lives by one key philosophy, to recruit players and people who live by his ‘360’ ideology.

“What we’re trying to do is have a culture where members who join the Pack share a similar view on how to live life being so deeply involved in rugby,” he explains.

“You can have the short-term on-field performances that bring you improvements, but it doesn’t always translate into good long-term performance.

“I spent time educating myself how important it is to find the right fit of a player and they have to embrace the ethos of the club and what it means to put on that jersey. That’s what we are looking for and when new recruits are suggested that is a real consideration.

“A team of individuals never beats a team of committed players who share views. I think we’ve got a squad that has that and if someone steps outside of what we deem our core values, it becomes an easy decision to say it’s not the right fit. That’s what we’re trying to look for.

“We want people with exceptional skills but they’ve got to have the heart and head as well.

“Actions reflect what we stand for, which is rugby balls in kids hands, making Toronto a centre of rugby excellence and a platform for our sponsors to be associated with our club and drive their businesses in certain directions. If actions of individuals fall out of those parameters the decision (to remove them) is actually easy. There might be some short-term pain, but it’s better to have that than a death of a thousand cuts.”

Argyle is a 360 person himself. While he has already invested millions into the club, he’s equally happy interacting with supporters of the sport. So much so, that every travelling supporter that comes to Canada is invited to his Japanese restaurant in the city.

“We’ve had some great experiences,” he said.

“The most fun, without a doubt, was Swinton. Normally Friday is a bit of a date night typically, then in come a couple of hundred Swinton fans singing in their club colours, it opened the eyes of our regulars who were having a romantic night having very loud, boisterous but extremely fun fans share the evening with them.

“They drank my restaurant dry of all kegs and bottles. It was wonderful.

“The gameday the day after they were embracing of our fans and that was really heartwarming. The average knowledge of our fans isn’t up to their level just yet, we don’t even have a song, although one of the Halifax lads who is part of their LS28 Supporters Group has promised they’ll create us a song written by them for our fans to sing.”

Toronto had a five-year plan for Super League. They could reach it in two. But when asked about the prospect of playing in the top flight, Argyle’s answer was simple. “We’re ready.”