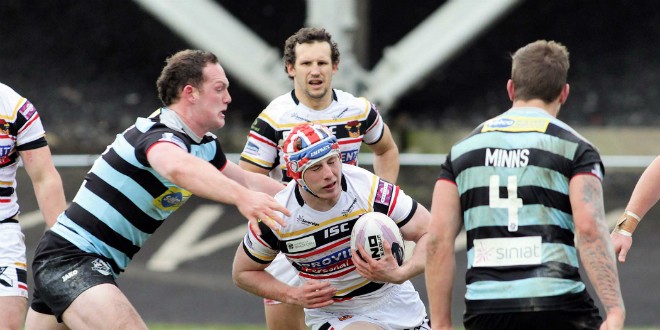 For this week’s debate, we’re casting a mindful eye forward to the 2015 season, and examining which of Super League’s two relegated clubs are best prepared for life in the Championship next season.

There’s a case to argue for both Bradford Bulls and London Broncos, with savvy recruitment and clever planning giving both clubs a case to believe they are better prepared than the other. But, with the likes of Leigh and Halifax waiting to welcome the two into the Championship, a quick adjustment and excellent preparation is going to be key.

So, Bradford or London – who is in the best shape for next year? We argue both side of the debate right here – and we welcome your comments on social media. It’s not a debate without your input, after all.

The case for the Bradford Bulls
Bradford started their recruitment drive for 2015 – at least publicly – later than the London Broncos, which is no surprise, given how they weren’t officially relegated until a number of weeks after London. However, whilst the Broncos are bringing in a lot of players from outside of the club, the Bulls seem to be keen on retaining their best players for next year – and that’s what stands them in such good stead for the Championship.

They will have a core of players who are already familiar with the coaching staff and the environment and pressure playing for a club like Bradford brings. In Lee Gaskell, they have potentially the best half-back outside of Super League next year – with Adam O’Brien another exciting retention from the Bulls. Add to that their end of season form; the Bulls have been playing fantastic in recent weeks, beating both Wigan and Leeds. That form will serve them nicely going into a big pre-season for the club – and with the Bulls likely to have the biggest crowds in the Championship by some distance next year, it’s Bradford who are best placed for life outside of Super League next year.

The case for the London Broncos
It’s been a dreadful season for London Broncos – with them likely to finish bottom of Super League, and in serious danger of not picking up a single win. However, that swift relegation allowed them to act early in the transfer market, and they are well ahead of the game in terms of their plans for 2015.

Richard Mathers is probably their biggest signing to date, and he will be a fantastic addition for the Broncos in the Championship next season. There is sure to be plenty of Super League-standard players in the Broncos’ ranks next year, with Rhys Williams another shrewd addition. And in boss Joey Grima, the Broncos appear to have a coach who is thinking about the long-term future of the club, as well as the short-term. The signs look bright for London next year, and they have to be considered as one of the leading lights when the Championship season kicks off next year.

This is a genuine chance for London to start with a blank canvas and get the club back on the right track. They are also tying down a number of academy players, and playing outside of Super League will be a fantastic breeding ground for the young kids. With the signings they’ve made and the plans Grima is putting together, it is London who are best placed for the tough test the Championship will provide next season.