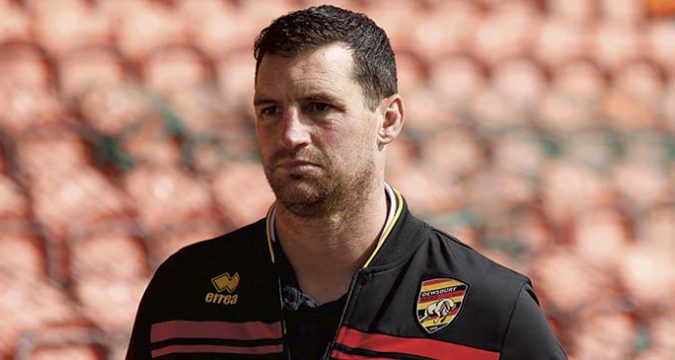 The former England winger took charge of the club ahead of the 2019 season and despite having little time to prepare the squad, guided them to safety last year.

With more time, Greenwood was given more time to recruit ahead of the current season and the Rams enjoyed an excellent start to the campaign, picking up eye-catching wins over Halifax and Widnes.

The Rams were sixth when the season was halted and played a part in being offered a new deal with the club.

His time at the club has seen a number of amateur and lower league players come through the ranks, further adding to his impressive spell with the club so far.

Greenwood said: “I’m really happy to be staying at Dewsbury for at least the next two years.

“I have nothing but positive words to say about everyone at our club, from the board, staff and our supporters.

“Everyone has been very supportive and understanding of the challenges myself and the club have.

“I’m sure there were some people having doubts during last season but the main objective of staying in the Championship was achieved whilst I learnt the things that needed to be changed to move us forward.

“The goal is for us to progress year on year and become a real force in the Championship.

“I believe we have made huge strides within the mentality of the playing group since last season and had made a strong start to the 2020 campaign before Coronavirus hit.

“It is important we can pick up from where we left off once play resumes, whenever that may be.

“We did really well to put the current squad and coaching staff together on the budget we had and there is some real quality and hunger within this playing group.

“I’m hopeful that being able to work with those finances for 2020 will help us next season, especially when you think about the financial restraints that the majority of clubs will face.

“We have created a culture here now that symbolises Dewsbury as a town – a hard-working mentality, no favours expected and, more importantly, good people.

“Players and coaches that want to be a part of that future will know they have to slot into this, but it creates an environment that not many will want to leave.

“I have ambitions to coach full time in the future and if that can be done at Dewsbury then that would be the perfect result.

“There is so much already in place here, so, with some smart planning and success on the pitch, I believe it is a realistic goal.

“For now, we will continue to try to get stronger on and off the field.”