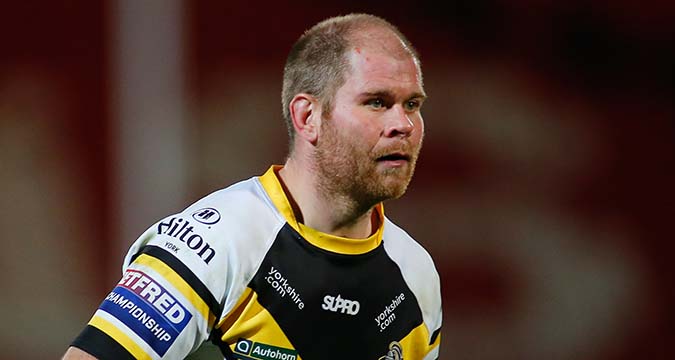 YORK CITY KNIGHTS made it back-to-back Championship wins but were pushed all the way by Dewsbury Rams in an enthralling contest.

James Ford’s ambitious side got off the mark at the third time of asking the previous week with a thumping success at Swinton Lions, but they were made to work much harder in West Yorkshire.

Looking for a third win in four, the Rams were on top in the first half-hour but couldn’t quite keep up with a resurgent York as the game progressed, with Kieran Dixon contributing 14 points and Matty Marsh adding to his four tries at Swinton with a second-half double to get them over the line.

Dewsbury got the first points at the end of a competitive opening quarter of an hour with a simple Paul Sykes penalty, and quickly turned that into an 8-0 lead as a brilliant move saw Liam Finn and Sykes combine before Joe Martin brilliantly tipped on for Matty Fleming.

The Knights were swift to respond with their first points though, eventually finding a way through a gritty defence with Riley Dean’s nicely weighted kick which Ryan Atkins touched down.

But the hosts were in their stride and soon took the lead to 14-6, with another delicious assist. This time it was Adam Ryder who provided it, shifting Jason Walton’s pass quickly on for his winger Andy Gabriel to squeeze in.

That capped an excellent first half-hour for Dewsbury, but indiscipline allowed their opponents back into the match before the break. Back-to-back penalties allowed York to lay siege to their line and two of their effective interchanges combined as Marcus Stock crashed over from close range off Danny Washbrook’s pass.

Another pair of infringements in defence then saw their lead wiped completely going into the interval, with the second penalty kicked by Dixon to make it 14-14.

The break didn’t check the momentum of the Knights, who took the lead for the first time within two minutes of the restart. Gabriel’s error put them in attack and Connor Wynne’s rapid pass out wide found Dixon with the space to make it over, with the winger also adding an impressive conversion.

This Dewsbury side doesn’t give in without a fight though, and back they came. Sam Day’s short pass saw Aaron Hall attempt to crash over, but when halted the prop smartly managed to sneak the ball down on the edge of the whitewash for his first try in Rams colours.

Sykes continued his perfect record from the tee to level at 20-20, but York hit the front again approaching the hour. Dean and Danny Kirmond were kept out before Wynne provided another assist, this time offloading with Marsh the beneficiary.

They had to work hard to hang on, the most nervous moment coming when Walton charged in only for Wynne and Dean to hold him out, and only with a couple of minutes to go could they breathe easy as Dixon’s break allowed Marsh to secure the win with his second try.

GAMESTAR: Hooker Danny Washbrook made a huge impact off the bench to turn the game in the Knights’ favour.

GAMEBREAKER: Only when Matty Marsh went over for the second time were York finally assured of victory.

For full coverage of the other Betfred Championship games this weekend get the latest edition of League Express, on newsstands every Monday in the UK and as a digital download. Click here for more details.