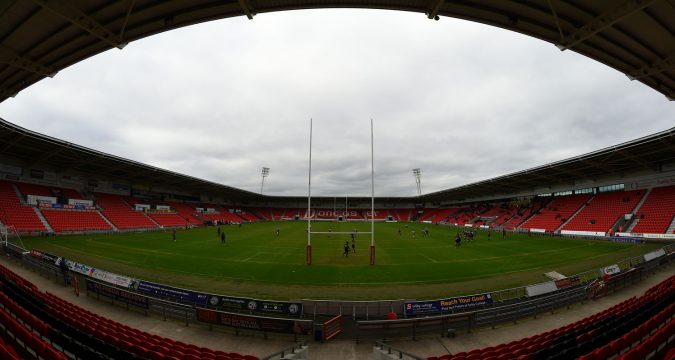 It appears to be a challenging and testing time for everyone involved at the top of a rugby league club – though someone should try telling that to Doncaster CEO Carl Hall.

The New Zealander – who has the town of Doncaster running through his veins – has just overseen a clever and canny season ticket campaign which has seen them treble their membership numbers compared to 12 months ago: from 200 to over 600, more than some Championship clubs.

Doncaster are well-supported under the Club Doncaster banner, which sees them neatly linked with Football League side Doncaster Rovers, the side with whom they share a stadium. At a time where nobody is quite sure what is going to happen with the league structure and the governance of rugby league, Hall is refreshingly optimistic about not only the state of the club off the field, but the prospect of mounting a promotion challenge in League 1 this year off the back of increased memberships.

“I dont know why everyone is so down about the game – it’s exciting for us going into 2018,” Hall tells TotalRL. “Whatever happens at the top, we should embrace it. We’ve got a fantastic product and I can tell you that at Doncaster, we can’t wait to get going.”

While some clubs in the lower leagues have encountered financial troubles in recent years, Doncaster are perhaps a beacon of hope for those who seek proof that sustainability can be attained outside of Super League.

Hall explains: “One thing I’ll never forget is when I took ownership of the club, the room was full of people in the stadium restaurant. They said ‘we don’t care what league we’re in, as long as we’ve got a club to support’.

“Ten years later, we’re still here and we’ve not had one bit of money trouble – but we understand we’ve got that tag on us around the town still because people have been burned by the club in the past.

“It’s a case of slowly slowly, catch a monkey – we’re running the club well, the fans are beginning to see we’ll always fund a team that will be competitive and they’re slowly coming back.”

Hall is hopeful that crowds – with walk-up numbers and away fans – could reach the 1000 mark this season. Having offered season tickets for just £60 this year – a figure Hall says the uptake in sales actually means they will have more money on memberships than this time last year – the future seems bright under new coach Richard Horne.

“I’m immensely proud of Challenge 1000,” Hall says of the membership scheme. “We just called it that to give it a name; in reality it was a bit of a dream target but to get to the number we have done, we’re happy. We’re putting a big emphasis on matchday experiences and attendances and we want to take it to another level off the field.”

Doncaster also benefit from Horne’s other employers – Hull FC – who they operate with as dual-reg partners. The dual-registration concept often comes in for flak from supporters and people within the game: but Hall says their relationship is more than just borrowing players on a Sunday afternoon.

“It’s more than just the playing side of things,” he said.

“I speak with Adam (Pearson) regularly about stuff at his club, and he asks about at stuff my club.

“It’s a full-on partnership. I speak to Lee Radford as much as I speak to Richard Horne at times, and we’ve worked on it. It’s not just happened overnight, this. They can help us achieve our targets for the year.

“In 2014 when we finished fourth in the Championship, nobody was worried about us having players from other clubs. When we got in trouble, everyone was quick to blame Hull for it! Our partnership is more than dual-reg: as I say, it’s a partnership.”

But Doncaster are not merely resting on their laurels in League 1 this year. The Dons, who finished sixth last season – a disappointment given they were riding high in the league above only three years earlier – are among a clutch of clubs like Bradford and York who will be targeting promotion.

Should that happen, Hall has warned the people of Doncaster they won’t stop there. “I would then sit down with Gavin (Baldwin, owner) and I’d like to think that in the first year back, maybe we’ll get all the backroom staff full-time.

“We’ll then go full-time within 12 months with a bit of luck. It has to happen. We’re looking forward to a huge year.”

On that basis, League 1 had better beware the Dons and their ambitious CEO this year. At a time when the sport is short on optimism for the future, Hall is a breath of fresh air.