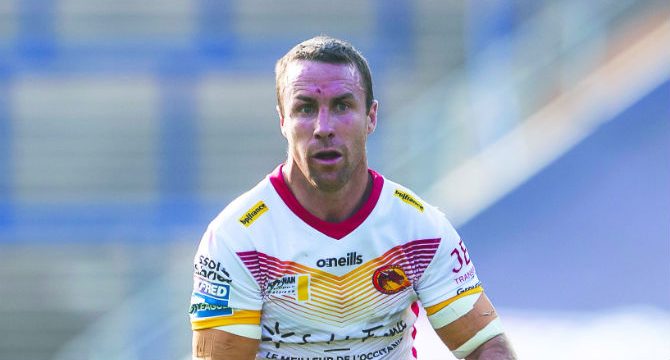 Catalans Dragons Chairman Bernard Guasch celebrated his birthday today with a 20-10 win for his side against Huddersfield Giants at the Totally Wicked Stadium in St Helens.

The Dragons led 20-6 at half-time with tries from Matt Whitley, captain Ben Garcia and Mike McMeeken, with James Maloney adding three goals and Sam Tomkins kicking one, when Maloney was off the field after having been sinbinned.

The late try by McMeeken was the pick of the bunch. It was started in his own half by Sam Tomkins, who created the space for a dash downfield by his winger Tom Davies. Giants’ centre Jake Wardle did a remarkable job to cut across the field to cut Davies down just short of the line, but the Catalans winger was able to pass the ball to the supporting McMeeken, who went over for what was possibly the Super League try of the weekend.

The previous weekend the Dragons had built an early lead against Hull Kingston Rovers but were then hauled back and only managed to win in golden point time.

This week they again faded, unable to score in the second half, while the Giants scored one try from Sam Wood in the 59th minute.

But their defence was able to withstand everything else that the Giants’ attack, which was missing Aidan Sezer for a second week, could throw at them and they held on to give their Chairman a happy birthday.

A full report from this game will feature in Monday’s edition of League Express. You can subscribe to the print or digital edition by going here.