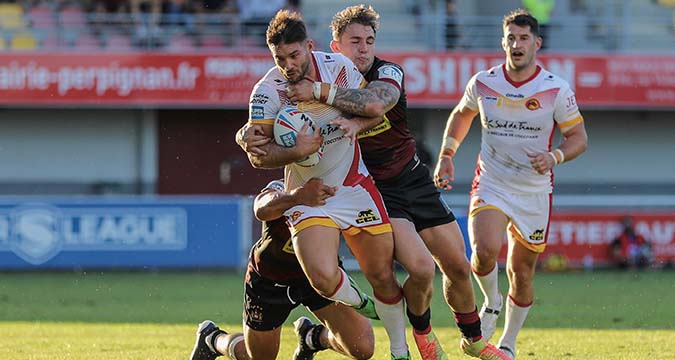 Catalans Dragons will fire up their recruitment plans following the loss of another first-team winger or centre in Arthur Romano.

The 23-year-old French international suffered a serious anterior cruciate ligament (ACL) knee injury while playing for the reserves last week and he will miss the entire season after surgery and a lengthy recovery process.

Romano had been expected to see more first-team action this year following the departure of David Mead and the expected non-return from Australia of Israel Folau. But now the Dragons will need to intensify their search to fill the remaining two overseas slots on their roster.

“Unfortunately it looks like the whole season is out for him.

“It’s a real shame, he was looking really good and he was one of the young players we were hoping to promote this year with more first-team experience.

“We are running our young French players in the reserves at the moment to make them game-ready and Arthur was doing really well. Unfortunately, these things happen and we’re all wishing him a speedy recovery.”

McNamara’s search to plug the backline gaps in the squad continues following the recent recruitment of Kiwi international Dean Whare on a two-year contract from Penrith Panthers.

“It is common knowledge that we are looking to recruit from overseas, but we don’t expect anything imminently,” said McNamara.

“As for Israel, there is still no development at the moment and he remains in contact with the club. He is still in Australia and we are awaiting news on a daily basis.”

Catalans will return to training on March 1st and have pencilled in a pre-season fixture with Toulouse Olympique two weeks later, giving the squad just over three weeks of pre-season practice together at Stade Gilbert Brutus.

“But we have to abide by government rules and I’m really pleased with how the players have adapted to the situation.

“They have all kept to their individual fitness programmes; we just need to get back together now and I’m looking forward to regrouping. We’ll be okay.”

McNamara said the Catalans were awaiting the full Super League fixture list, which is due to be revealed on Friday, before deciding on travel arrangements and the possibility of an extended stay in the UK for his squad.

“At this stage we are continuing with our plans of travelling back and forward to the UK in the most safe and efficient manner possible and there are no immediate plans for us to stay in England for an extended period,” said the coach.

The Dragons are already facing extra travel costs with the staging of their first fixture of the season – a “home” game against Hull KR – at Headingley on March 27th.

“For us it’s the additional cost of travel when we have to switch a home game,” said McNamara.

“It’s not just the loss of home gate revenue, because it looks like all clubs will be without supporters in the early rounds. When we play one of our home games in the UK we face huge unbudgeted costs, on top of all the current financial difficulties we face.

“We haven’t seen how the rest of the fixtures pan out for the season, so we’re still in the dark somewhat, but staying in the UK is still a last-resort option.”