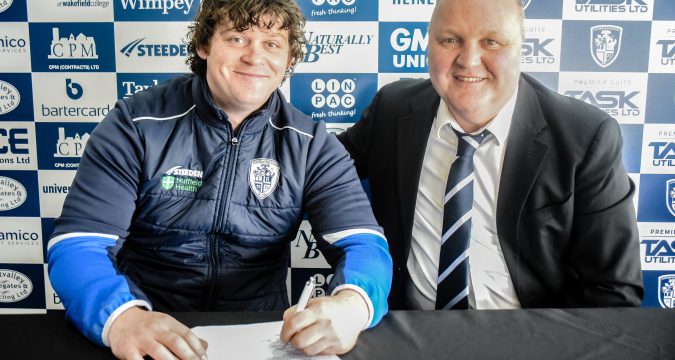 The former Swinton coach arrived in July of last year and signed a 12-month contract. He was tasked with guiding the club through the Qualifiers, and despite losing his opening seven games, they defeated Halifax to secure their first ever Qualifiers win and seventh place.

A heavy recruitment drive in the off-season saw the club put faith in the former Leigh and Warrington player, signing the likes of Martyn Ridyard, Gareth Hock and Tom Holmes.

During his first full season in charge, Duffy has guided the club to nine wins in their opening 11 league games and are currently just one point off league leaders, Toronto.

“I am absolutely over the moon to be extending my stay with the club,” he said.

“It has been a tough but extremely enjoyable challenge and I am loving it here.

“I learned a great deal during last year’s Qualifiers, which stood us in good stead for 2018 both in terms of recruitment and what we needed to achieve during the closed season.

“Me and my backroom team have been brilliantly supported by the club and have been backed all the way with our transfer targets.

“We cannot afford to get ahead of ourselves but we are in a good place and have put together a fantastic squad.

“Our supporters have been fantastic, getting behind the team in big numbers home and away, and it has been great to see.

“I think the players and staff are really enjoying the ride and we as a club are looking forward to seeing what the future holds.”

Mark Campbell, the club chairman, added: “John has delivered everything we had hoped for, which is no surprise to me given the fine detail he puts into his work.

“He has a great work ethic which has clearly rubbed off onto his staff and players. John spends huge amounts of time on the grass, developing the players and getting the best out of them.

“The rewards have shone through this year and this leaves us sat second in the league – just one point behind a full-time club spending three to four times the amount we have.

“Behind us are three more full-time teams, who, again, have spent huge amounts more than us.

“In a competition which is the best I have known it since becoming involved in 2006, John’s achievements are no mean feat – especially for a part-time team.

“The team is incredibly fit and is improving all the time. I for one am really looking forward to seeing how the season unfolds.”