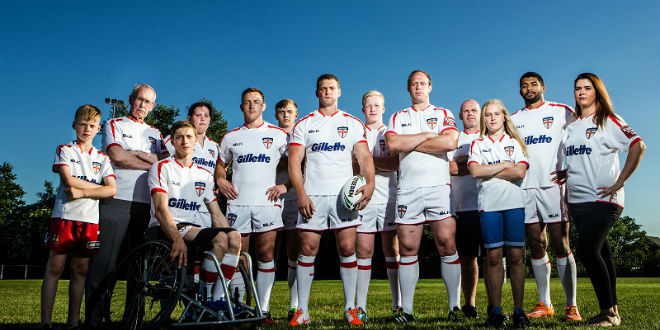 The brand new England Rugby League shirt for 2015 was unveiled at a special fans’ event at Wigan St Patricks on Tuesday evening.

England captain Sean O’Loughlin, Kallum Watkins, James Roby and Chris Hill were in attendance to officially launch the jersey that will be worn in the forthcoming games against France and New Zealand this autumn.

Drawing inspiration from the St George’s Cross motif, synonymous with previous England Rugby League kits, the jersey has been designed and produced by BLK and features a dynamic contrast red panel tapering from the shoulder seam down to add a dash of colour. The ‘Wall of White’ hashtag has been embossed at the lower back of the jersey and the shirt is finished with an England woven badge logo on the left breast and BLK silicon gel logo on the opposite side.

The official launch photocall also featured players from England Academy, England Youth, England Women and England Wheelchair, plus five competition winners who got the opportunity to be part of the photo and join the ‘Wall of White’.

The shirt launch fan event saw hundreds of supporters meet the players for photos and signatures and enjoy other fun activities, including a BBQ.

Former Wigan St Patricks junior Sean O’Loughlin said: “This is where it all began for me and where, like all my team-mates back then, the dream of playing for my country first grew.

“To be back here now as England captain launching the new 2015 kit is fantastic. The lads in the squad never forget where they have come from and it’s an honour to be able to do this and share it with the fans.

“It feels great putting the kit on again and I’m looking forward to seeing all the fans create the Wall of White when we take on France and New Zealand this autumn.”

RFL Director of Performance and Coaching Jon Roberts said: “Having worked closely with BLK, we are delighted that they have produced a range of high-performance training apparel and playing kit for our England players.

“The shirt still carries the St George’s Cross and every single player that pulls on the jersey will know what it means to represent their country when they see that cross on their chest.

“It’s great to see players like Sean, James, Kallum and Chris along with representatives from our Academy, Youth, Women and Wheelchair squads engage with fans to get excitement building for the international games.”

BLK Chief Marketing Officer Jason Sintome added: “Our production and design teams were very mindful of delivering a range of innovative, high-quality garments which not only enabled high-performance in the toughest conditions, but were also mindful of the England’s rich history and traditions.

“Creating a ‘Wall of White’ was a key element of the production brief and the new England kit certainly set the standard in regards to minimalistic design.”