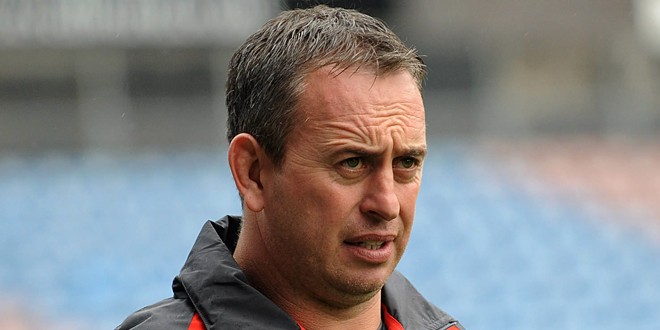 England coach Steve McNamara has named a 34-man squad for the mid-season training camp at Loughborough University from June 15-17 in preparation for the 2014 Four Nations in Australia and New Zealand.

The players are drawn from eight First Utility Super League clubs and comprises the nucleus of the 2013 Rugby League World Cup squad, with the addition of players from the England Knights programme.

McNamara will fly in from his home in Sydney to lead the camp, which he feels is an important part of the national team’s bid to taste international success Down Under this autumn.

“The camp is very important for us and I’m looking forward to working with all the players as a group again,” he said.

“We have made considerable progress over the last few years by getting together at specific stages of the year and this training camp allows us to build on that progress by spending valuable time together.

“It’s been a difficult process putting this squad together because of the sheer number of players who were in contention: there is an enormous amount of talent emerging through the ranks in Super League.

“Many of the players in the squad were with us for the World Cup and there are some great additions to the group who will benefit from being in a camp that will focus everyone’s minds on what we need to do to achieve international success.

“We have widened the net for this camp and the door remains open for every player in Super League: there are a lot of games remaining between now and the end of the season and a lot of opportunities for players to put themselves in contention for selection.”

Of the 34-man squad named today, 25 players will convene at Loughborough on Sunday June 15: the nine Wigan Warriors players are unavailable following the rescheduling of the First Utility Super League Round 2 fixture against Widnes Vikings, which will be played on Wednesday June 18.

The England mid-season training squad is as follows (professional and community clubs in brackets):