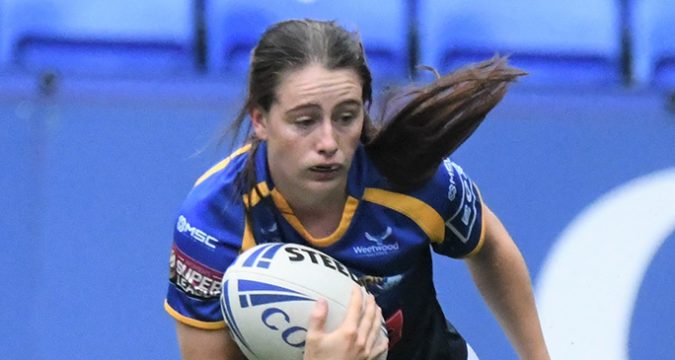 The National Lottery-sponsored international, which kicks-off at 6pm, is part of a double-header at the Halliwell Jones Stadium.

The England men’s clash with the Combined Nations All Stars follows at 8.15pm.

Teenage Leeds winger and 2019 Women’s Super League Grand Final hero Fran Goldthorp, above, is in the squad for the first time following an impressive start to the season.

Wigan’s Vicky Molyneux has been selected and could earn her first England cap since a 2007 victory over France.

Castleford pair Emma Lumley and Hollie Dodd, who made history by featuring in the 2019 Women’s Challenge Cup final at just 16, have also been named.

Army sergeant Carrie Roberts could make her first international appearance since 2015 when she crossed for three tries in a two-game series against France.

St Helens forward Emily Rudge has been confirmed as captain.

Richards said: “It’s been a tough process to pick the squad as I have been impressed with several players both in training and with their performances in the Women’s Super League.

“I’m delighted to have been able to select a handful of players who could all make their international debuts against Wales and I’m excited to see what some of these players can do on the big stage.

“This is a great opportunity for all of my players to put their best foot forward and show me they want to be in that squad for the World Cup later this year.”

A limited number of tickets for the double-header remain available from rugby-league.com.