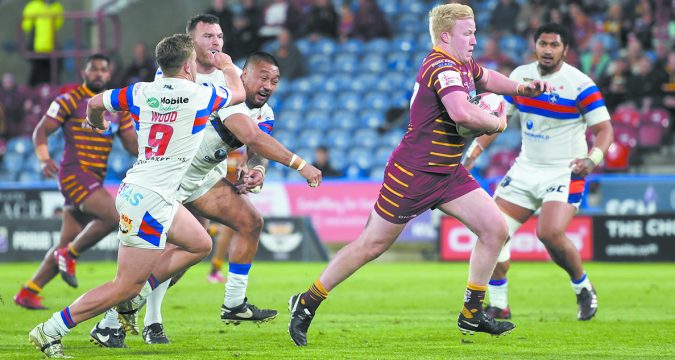 As revealed in League Express on Monday, the highly-rated 20-year-old has signed a new deal which will keep him at the club until 2022 after bursting onto the scene at the John Smith’s Stadium.

Despite playing just five top-flight games for the Giants this season, English has earned incredible praise for his superb performances, which have already seen him dubbed as one of England’s most promising young prospects.

After making his debut last year, English earned rave reviews during a short stint at Dewsbury at the beginning of the season. He soon returned to the Giants and made his debut in their defeat to Castleford. His drastic rise continued when he scored his first try for the club in their Challenge Cup victory over Wakefield earlier this month.

The Giants have wasted no time tieing down the young star, who will spend the next several years with the club.

“I’m absolutely buzzing to have signed a new contract,” he said.

“I’ve always been at Huddersfield and it feels like home. Signing for four more years gives me the security to try to develop as much as I can to become an established Super League player.

“My debut feels like a lifetime ago now, playing away at Leeds, it was a good victory. Last season we kicked on after the Magic Weekend to secure a place in the top eight and hopefully we can do that now.

“I’m excited about the future. With all the youngsters that have signed on with Innes and Louis Senior and having young players like Sam Wood and me recently coming through, there’s quite a few of us youngsters that are all going to be here at the Giants for the next few years.”

Praise for the youngster hit new heights courtesy of his own teammate Sebastine Ikahihifo, who compared English to James Graham.

“He’s got some great energy about him, he’s got character. He’ll go a long way, I think he’s the next James Graham. He’s got some ball skills and power behind him. He can just run the ball all day and play long minutes.”

Huddersfield have handed new contracts to several of their existing players in recent months. The likes of Ollie Roberts, Ikahihifo and Danny Brough have extended their stays at the club while young twins Innes and Louis Senior penned new deals several weeks ago.