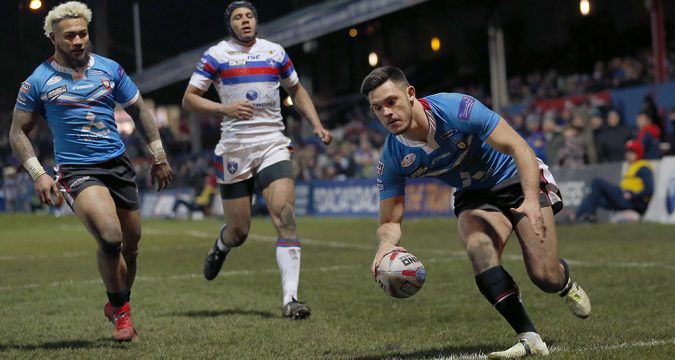 Niall Evalds is ready to grasp his opportunity and make Salford’s fullback position his own following the departure of Gareth O’Brien.

O’Brien left the club to join Toronto Wolfpack last month, opening a path for the 24-year-old to secure a spot in his preferred position.

Despite spending the majority of his senior career on the wing, Evalds believes he is better suited to playing at fullback.

His skills were there for all to see in the club’s most recent victory over Catalans, scoring one try and playing a part in several others as he set his stall out to cement himself in the position.

Now, Evalds says he is ready to show everyone what he’s capable of at fullback.

“I’ve always seen myself as a fullback,” he told TotalRL.

“I only really started wing in first-team to be honest, coming up through the ranks I always played fullback or stand-off. It’s where I’ve played most of my rugby and where I feel most comfortable.

“I just think the wing nowadays is coming out of yardage with strong carries and quick play the balls, which isn’t really my game. My game is playing with the halfbacks and getting my running game out of the back.

“I think I’m a much better player at fullback and that’s where I see myself. Hopefully I can nail that spot down, get some form and contribute some wins to the team.

“I’m ready for a big season and if I get a consistent run of days I hope to prove what I can do at fullback really.”

Evalds was recently called up to the England Knights training squad, and he’s hopeful that a regular berth at fullback will help him push up the pecking order, despite heavy competition.

“There are some great fullbacks around and in the squad,” he said.

“Competition is only good and it will be interesting to see how we stack up with each other. I’m looking forward to linking up with the squad, it’s a different environment for me really because I’ve only ever been at Salford, so it will be good to learn of other players and coaches.”