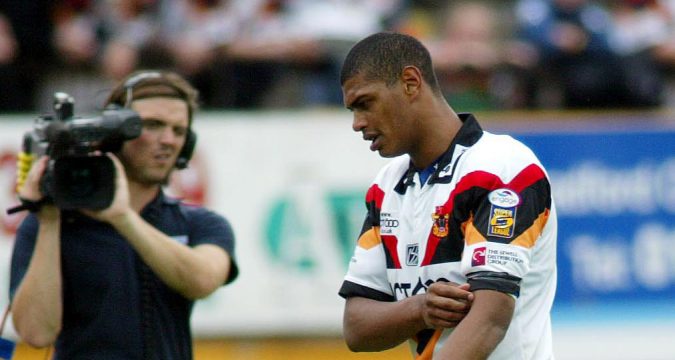 Bradford Bulls legend Leon Pryce has revealed he is “buzzing” after agreeing to commit his future to the club for the 2017 season, TotalRL can reveal.

Pryce had initially rejoined the Bulls from Hull for the 2017 season before the club were liquidated earlier this month – but last week, the Rugby Football League announced that they had found new owners to ensure the club could take part in the upcoming Championship season.

Liquidation meant all the club’s former players became free agents – including Pryce, who won every domestic honour available during a stellar first spell with his hometown club – with a number of high-profile members of the Bradford squad such as James Clare and Kris Welham subsequently securing deals elsewhere.

However, Pryce has revealed he has agreed to stay following a meeting with the new hierachy at Odsal – and he says he’s delighted to get the deal done in time for the new season.

“I’m absolutely buzzing that I’m going to be staying,” he told TotalRL.

“It’s been a really tough period over the last nine weeks so to finally have my future secured for this season and maybe in the future coaching-wise is really pleasing, really relieving and I’m just delighted. In terms of coaching, I’ve got to meet the coach first but my priority now is playing for Bradford in 2017 – which is all I wanted to do since the day I came back.”

Pryce also revealed that he was pleased with what he heard from the club’s new owners, Andrew Chalmers and Graham Lowe.

“I’ve had a really positive meeting with the two of them and both guys were upfront and honest – we had some good conversations.”

The new owners are currently meeting all members of the club’s playing staff who had not secured deals elsewhere, but the signature of Pryce is undoubtedly a major boost for the Bulls as they prepare for the big kick-off at Hull KR next month.