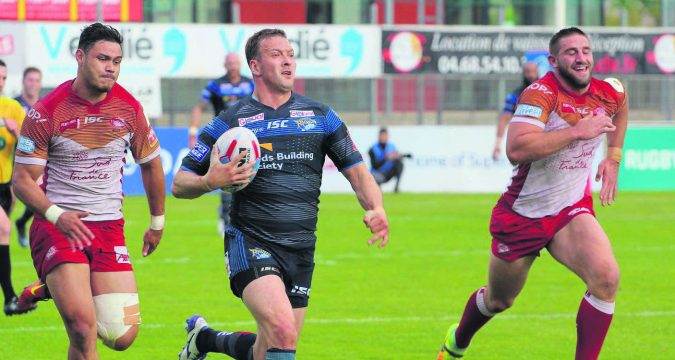 On the day he announced he would be leaving hometown club Leeds at the end of the season, TotalRL.com’s Aaron Bower spoke exclusively with Danny McGuire about why the time was right to leave, what the future has in store and much more..

TotalRL (TRL): Danny, first of all, how difficult was it for you personally to come to this decision?
Danny McGuire (DM): It was very difficult, to be honest with you. I’ve been at this club since I was 12, and it’s all I’ve known – it’s like one big family and is a massive part of my life. But I just had a feeling in my gut that it was the right time for both myself and the club to part ways. They need to plan for the future and a new challenge for me will do me the world of good. I’m excited about that. You get a feeling about these things sometimes and I suspected it was right.

TRL: How quickly did it all happen and when was the decision reached?
DM: Well, I had a contract or an option in my contract for next season. But I’ve got a great relationship with Gary (Hetherington) and we’re really open with each other. They’ve signed Richie Myler and Jordan Lilley is now ready to lead a Leeds team. Liam Sutcliffe is ready to step up too, and while I never thought I’d play anywhere else, it was the right time. I’m glad it’s done and we can focus on a big end to the season.

TRL: You’ve spoke of being able to take your opportunity when you debuted in 2002 with people leaving – do you sense now is the time for Jordan and other young stars.
DM: Yeah, I do. I got that opportunity when I started and you need to take it with both hands. I’m fortunate to have had that, and myself, Rob (Burrow), Chev (Walker) and others got it – it’s now the right time to move aside and give someone an opportunity. That said, I feel like I’m still playing well and this isn’t a retirement speech: it’s just a separation from Leeds. Jordan and others are ready to come in.

TRL: Some Leeds greats have gone out on a high – what can you do this season?
DM: We can achieve some great things. Look, we’re in a brilliant position and most teams would bite your hand off for where we are. The lads are enjoying what we’re doing and being around the boys is great. Hopefully we can have a great finish; Kevin, Kylie and JP did and while I’m not going to say that’s how I’ll bow out, I obviously hope it is. Ask any player and that’s how you want to finish.

TRL: But what about next season? What’s next for Danny McGuire?
DM: The difference between those guys and me is that they were retiring – or leaving the sport. They never laced the boots up again but I’m 99 per cent certain I will next season.

TRL: Do you still feel like you’ve got something to offer the sport at the top level?
DM: Definitely. I really do. I think I’ve got something to offer and that’s made it harder, knowing I wanted to continue but it wasn’t right to be at Leeds. That’s been the hardest thing to contend with. I’ve got a few ideas over what will happen in the future and knowing what I’m going to do next. I’ve been at Leeds since I was 12, so this will be something different and fresh for me.

TRL: When do you expect your future to be confirmed?
DM: That’ll all be done in the next couple of weeks – then I can focus on Leeds and what I’ve got left to achieve here. Hopefully it will be sorted soon.

TRL: How certain are you of your next club and your next move?
DM: Pretty. I’m almost certain. But it just needs a few details finalising on it all before it goes public.

TRL: Finally, on Leeds, you’ve won seven Grand Finals already. How special, given you’re leaving and what the club has been through over the last 18 months, would number eight be?
DM: It’d be up there, for sure. It’d be very high up there, in fact, with the captaincy and the struggles we’ve had and the tough times as a player. It would be really special and I want to stress we’ll be giving it absolutely everything we’ve got at the club to try and make it happen.