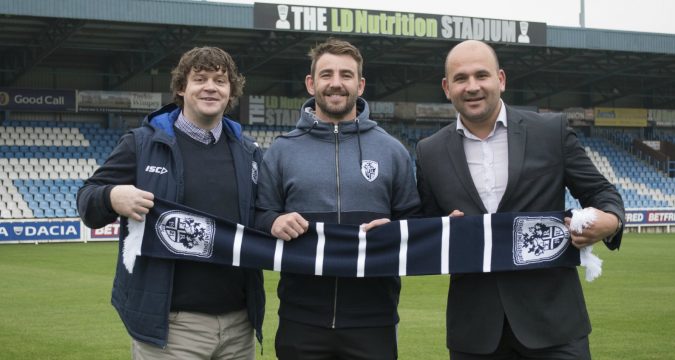 Ridyard, who has signed a two-year deal with Rovers, is John Duffy’s sixth new signing ahead of next season, with Featherstone revealing Ridyard rejected offers from elsewhere to sign for the ambitious Championship side.

And after also turning down an offer to remain with the Centurions for 2018, Ridyard cannot wait to begin the next chapter of his career at the LD Nutrition Stadium.

Ridyard said: “I am really looking forward to the challenge ahead, having played all my career at Leigh – other than a stint with Huddersfield – this is something new for me.

“It is a fresh challenge and one I cannot wait to get my teeth into. The idea of working with John Duffy was a major pulling point for me. I have known him for a long time, I have played with him and I know what he is capable of.

“The changes he has made and will continue to make here will make a great deal of difference. There is plenty for Featherstone supporters to be excited about going into 2018.

“I am looking forward to meeting up with the boys in November and getting straight into the grind.

“This is a team with a proud set of supporters and I have always loved playing here, so to be doing so for Featherstone will be extra special.

“On paper, there is a fantastic squad in place here. I am looking to come here and put my own stamp on things.

“My style of play is to control the game and take the team around the park, which, alongside the rest of the boys here, I will be looking to do.

“In modern-day rugby league, pivots can play all over the park and there are some great ones here, which will keep us all fresh and fighting for places, while making us more dangerous as a team.

“Every year the Championship has got tougher and tougher but we will be right there in the mix with the likes of Leigh, Toronto, London and Toulouse.

“This move feels very much right for me and I am now fully focused on expressing myself in the way I like to, displaying the game I have developed over the years.”

Rovers boss Duffy added: “We are thrilled to have pulled off such a big signing for the club, we feel Martyn will bring a great deal to what we are trying to achieve here,” the Featherstone head coach said.

“He brings strong leadership qualities and a fantastic track record. I feel he can be a genuine leader for the team going forward.

“He has been there and done it all at Championship level and was a part of Leigh’s promotion last year.

“I have worked and played alongside him in the past and know exactly what he is capable of and what he will bring to the party.

“Martyn has the kind of composure that a coach looks for in a player during big games and we feel confident he will achieve great things here.”