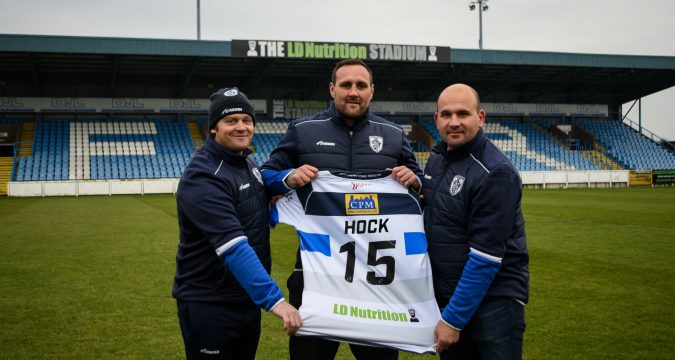 Featherstone Rovers say they have beaten off stiff competition to complete the signing of former England international Gareth Hock.

Hock, who has made over 250 domestic appearances since turning professional in 2003, has put pen to paper on a one-year deal with the club. The former Wigan, Widnes and Salford forward arrives following a three-season spell with Leigh Centurions.

Hock is seeking further success having helped the Centurions to promotion in 2016, an achievement he believes Featherstone are capable of emulating.

“I am really happy to be joining Featherstone, where I have enjoyed some great battles in the past – with Wigan and Leigh,” said Hock.

“There is a buzz about the place and, having spoken to Martyn Ridyard about how much he is enjoying life here, signing was a no-brainer.

“I have experienced promotion to Super League with Leigh, it was one of the biggest achievements of my career, and would love to do it all over again with Featherstone.

“The club has recruited very well and will certainly challenge the likes of Toronto and Leigh at the top of the table.

“I am looking forward to playing my part in what could be a really special season for Featherstone Rovers.”

Duffy believes the Wigan-born front-rower will bring “power and aggression” to the Rovers’ ranks and cannot wait to begin working with his latest recruit.

“Gareth will add a great deal of value to the squad and I am very excited to be bringing someone of his calibre to the club,” said the Featherstone boss.

“His experience is priceless and he will play a big part in what we are looking to achieve this year.

“The club has done a great job in getting the deal over the line. Now we need to get Gareth ready to make his debut, which will hopefully be in the next week or so.”