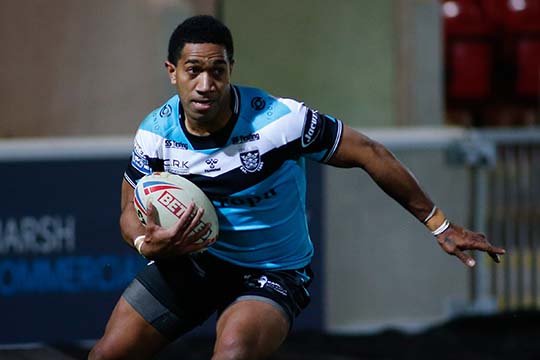 Fijian flyer Mitieli Vulikijapani is ready to step on the gas as he tries to cement a regular place at Hull FC.

The 27-year-old former rugby union player, usually known as Mitch, was granted a release from active service in the British Army to join Brett Hodgson’s Black and Whites for the season back in April.

Versatile back Vulikijapani, who played for Harlequins and Saracens in the 15-a-side game, had a brief loan spell at Bradford to help him get up to speed in league.

With Josh Griffin out for the season due to a ruptured Achilles tendon and Carlos Tuimavave (hamstring) and Cameron Scott (shoulder) also sidelined, he made his debut in Hull’s 64-22 Super League win at Leigh last week.

That was followed up by a second appearance in Friday’s 17-10 home win against Huddersfield, and Vulikijapani is eyeing another outing at home to Salford next Monday, July 5 (Thursday’s derby has been postponed because of Covid issues in the Hull KR camp).

He has taken advice from compatriot and fellow soldier Ratu Naulago, who scored 23 tries in 34 games over two seasons at Hull.

“I played sevens and 15s union with Ratu, I followed Hull when he was here, and I look up to him because of his achievements,” he explained.

“I spoke to him lots of times and he told me ‘just go out there and show what you can do’.”
And that seems to have worked, with Vulikijapani picking up three Albert Goldthorpe Medal points for his performance against the Giants on Friday.

“Going to Bradford was a massive thing for me. Hearing positive comments from a top coach like John Kear had a massive impact on me,” he added.

“And Brett Hodgson has been great. He gave me the chance to sign for Hull, and has helped me a lot, giving me lots of tips.

“The biggest challenge has been the physical stuff on the field, one on one, running straight at one another for the 80 minutes.

“But I am happy in the environment here and earning every day, picking up tips from the coaches.”

Last week Hull took their former player, 25-year-old centre Jack Logan, on a four-week loan from Championship side Batley, with Logan scoring a try against the Giants on his return to the club.

And in other news, MKM Building Supplies have been announced as the new title sponsors of Hull’s stadium after agreeing a five-year contract.

The UK’s largest independent builders’ merchant are long-standing supporters of the venue, which is shared with Hull City Football Club.

Meanwhile, Hull have joined forces with Championship club Whitehaven to run a centre of excellence in West Cumbria.