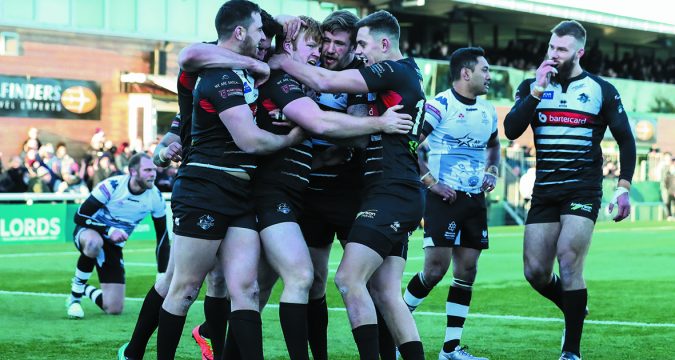 It’s funny how things can change in a week.

Around ten days ago London Broncos were flying high and looking dead certainties to make the top four again.

But two defeats in four days have seen their unbeaten start come to an abrupt halt and drop to fourth in the table.

There’s little doubting the Broncos’ capabilities, but another defeat on Sunday would make people question just how viable a threat they are.

They did endure a torrid run of form just before Easter last year, which included a defeat to this weekend’s opponents, Halifax.

However, they responded superbly and went on a stunning winning streak. May the same happen again this year?

Staying on the same fixture, there’s little doubting just how big a game Sunday’s is for Halifax.

As of now, Fax have solidified their position as the best of the rest, beating every team they’ve played below them and Leigh Centurions too.

But in three attempts, they’ve failed to crack a side currently in the top four, with London the fourth and final team they have a chance to pick off.

To validify their top four hopes, Halifax need to win this match. Defeat would leave them further adrift of the top four and looking like a side just not quite good enough to make the Qualifiers.

A superb Easter period has put Batley in a decent position in the table.

Heading into this weekend, they’re four points adrift of the top four with a game in hand.

Their start to the season has been steady yet unspectacular, but that could all change if they pick up a victory on Sunday.

Table-topping Toronto are in town, and it provides Matt Diskin with a chance to thoroughly examine just how far they are from being a top-four side.

It won’t be easy, but the Bulldogs have shocked everyone once, why not again?

Dewsbury will be the side looking to keep him quiet this week, but all eyes will be on the winger and his try-scoring exploits.

It won’t be long until Super League clubs come calling.

A battle at the bottom

Calling any game a ‘must-win’ in April seems bold, but ask the Swinton and Sheffield camps, and they’ll probably tell you that’s the case.

The Eagles currently occupy a place in the relegation zone while Swinton are bottom and winless.

The match presents both sides with a big opportunity to pick up points.

But defeat could be disastrous.