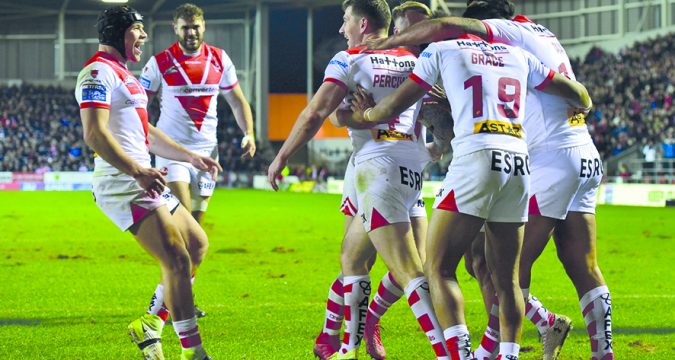 The first round of the season has been and gone, and while it would perhaps be unwise to make too many assumptions, a number of clubs wasted little time in setting their stall out from the off.

There were 11 victorious teams across Super League and Championship in the first round of the year, but here are the five that impressed us the most.

As alluded to earlier, it would be wrong of us to make too many assumptions based on 80 minutes of action.

But surely, Garry Schofield must already be reconsidering his prediction of a tenth-placed finish for the London Broncos?

Danny Ward’s first competitive game in charge was a huge success as the Broncos ran out 56-6 victors over newly-promoted Barrow.

The Broncos didn’t appear to have lost any of their attacking groove despite the departure of Andrew Henderson and some key players.

Bigger challenges await, but this was an impressive start.

The performance of the round came from Justin Holbrook’s well-tipped side, as they decimated last year’s Grand Finalists.

St Helens have been heavily tipped this year and they made it evidently clear why with a rampant and thorough performance against Castleford.

Ben Barba put in his best performance in Saints colours while other big stars such as Mark Percival and James Roby looked like they hadn’t lost a step since the end of last year.

They made their intentions blatantly obvious in the first round. Super League is on alert.

There’s making a statement, and then there is doing what the Wolfpack did.

Toronto weren’t given a chance by anyone ahead of their trip to Leigh. By the end, they’d convinced everyone that they are major players in the Championship this year.

Paul Rowley’s side were outstanding in the second-half, completing sets at 95% and scoring some stunning tries.

A troublesome pre-season had made everyone forget just how much quality the Wolfpack possess. Liam Kay is in the form of his life, Ryan Brierley was devastating at this level a few years ago and they have a raft of Super League experience.

The Wolfpack have arrived.

We’re used to Widnes being dismissed , but this result came as little surprise to anyone in the Vikings camp.

Denis Betts and co have been quietly confident throughout the off-season and their dismantling of Catalans vindicated that feeling.

Last year’s awful campaign looks set to be a blessing in disguise. The club and the team feels rejuvenated, and with a fully fit squad currently at their disposal, it shouldn’t come as a surprise if they pick up more impressive results.

It wasn’t so much the result that caught the eye here, but the manner in which they achieved it.

Wigan’s attack has been a big talking point since last year’s disappointment, and Shaun Wane had promised to change things up.

That was evident on Friday as the Warriors played exciting, flamboyant rugby.

Many coaches will often say similar things about Wigan. They know what they’re expecting, it’s stopping it.

But there’s a new, unpredictable dimension to Wigan if this evidence is anything to go by.