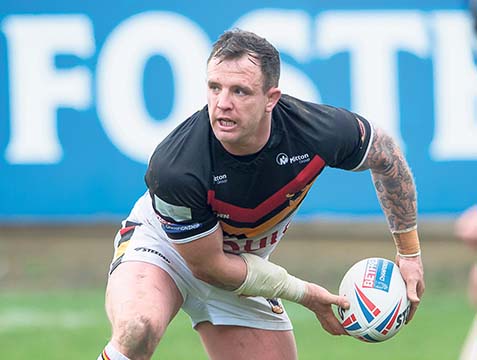 Bradford Bulls hooker George Flanagan says the backing he has received from the Bulls in the wake of a second suspension for ‘attacking an opponent’s testicles’ has persuaded him to do a U-turn on quitting Rugby League.

The 34-year-old is serving a ten-match ban (he was also fined £250) following the Challenge Cup first-round tie at Featherstone, one of his former clubs, but he maintains his innocence.

Flanagan, who has also played for Batley, Dewsbury and Hunslet, was given an eight-match ban for a similar offence in August 2019.

In a social media post, he wrote: “Just thought I’d clear a few things up.

“Firstly, it’s been a really tough period for me. Probably never felt so low mentally and physically.

“People who know me know the true me, especially my family and friends, who have had my back from day one.

“The things you see and hear on social media doesn’t paint the picture of the real me and it hurts for people to think bad of me or think I’m a bad person. I’m not.

“It’s not just affected me, my kids and wife have had to deal with it too, which hurts the most.

“Over the past weeks or so I’ve been doing all I can to clear my name of any wrongdoing or guilt of anything. This still remains the same although I can’t go into full detail of it all.

“After a long, hard think about what’s next for me, I was deffo thinking of calling it a day with rugby and focusing on life after.

“But after the support the club have given me through it all, I can’t just walk from what I love the most, that’s playing rugby for the club I love to represent.

“With the coaches, players and family right behind me, I just can’t go out on this note because I know deep down I’m innocent in all this, so I’ll accept my punishment, train hard come back fitter and a better person.

“I’ll be showing support in training and on game days for the boys and trying to repay the faith to best of my ability.”