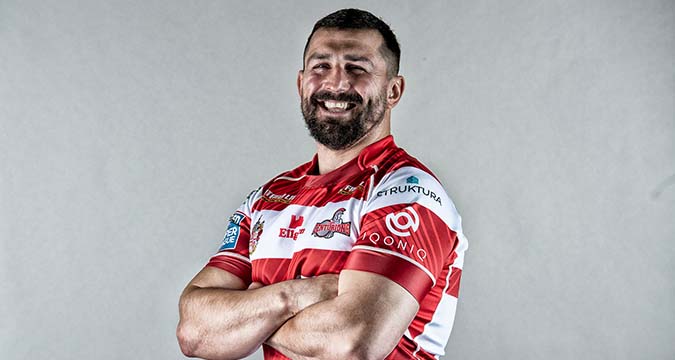 Leigh prop Ben Flower is itching to get his 13th successive Super League season underway – and earn the opportunity to play in a second World Cup.

The former Crusaders and Wigan player played for Wales in the 2013 tournament, but missed out four years ago with an Achilles tendon injury.

A damaged hamstring sustained late last season kept him out of the Centurions’ reckoning until Sunday’s Challenge Cup third-round clash with Huddersfield.

Now the no-nonsense 33-year-old from Cardiff, who switched from rugby union in 2007 and won his first Wales cap the year after, wants to make up for lost time, with both cub and country.

New boys Leigh head to Castleford on Friday seeking the first Super League win after defeats by Wigan and Warrington, while they went down on Sunday in the Challenge Cup to the Giants.

And Flower insists: “We know we have it in us to upset a few teams this season.”

Leigh and Hull KR are the only two top-flight teams with no representation in Shaun Wane’s latest England squad.

The Centurions’ playing pool includes a string of Scotland internationals, and Flower, who has featured in 15 Test matches, is desperate to return to the Wales fold, with group games against Cook Islands, Tonga and Papua New Guinea on the agenda.

“Helping Leigh stay in Super League, then perhaps another World Cup with Wales, would be amazing,” he said.

Peats made a tryscoring debut for Leigh in the Challenge Cup on Sunday.

“He will bring a lot of energy and his defence is very good,” Duffy said of the 30-year-old, who has also played for South Sydney and Parramatta.

After pushing Wigan close, Leigh went down heavily to Warrington, and Duffy added: “It showed us that we have to be much better.

“It was all too fast how the game started and our attitude probably wasn’t on. We now know we can’t have a minute or a session without full focus.”