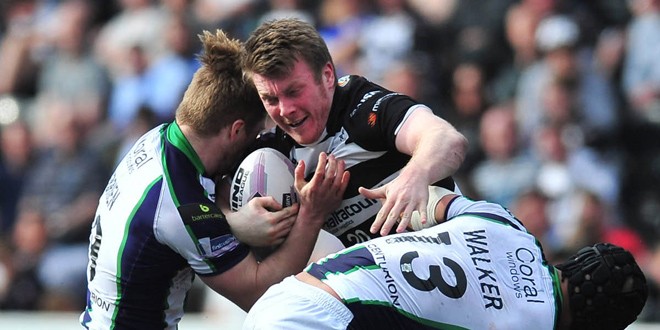 Castleford Tigers have secured the services of Paddy Flynn for the rest of the 2016 season.

The winger joins the club from Widnes and injects more depth to a Castleford squad struggling with injuries.

Flynn joins the Tigers on loan from the Vikings having only appeared in one game during the 2016 season so far, playing in the Vikings Challenge Cup victory over Rochdale.

“I’m really happy about the loan deal, said Flynn. “I’ve always been a fan of Daryl and the way his teams play. Even when Powell was the Featherstone coach when Widnes were in the Championship I always thought they were tough to beat and well organized and that’s always down to a good coach. On that note I can’t wait to get started and rip in.”

Daryl Powell added: “Paddy Flynn comes to us at a crucial period of the season. Whenever he has played against us he has had a strong influence on the game, he is a tough defender and carries the ball very strongly in all areas of the field. I’m confident he will add depth and quality to our back line as we look to strengthen our game in what is going to be a really tough block of games.”

Flynn will be unavailable for Cas’ Challenge Cup game with St Helens at the weekend as he is already cup tied.