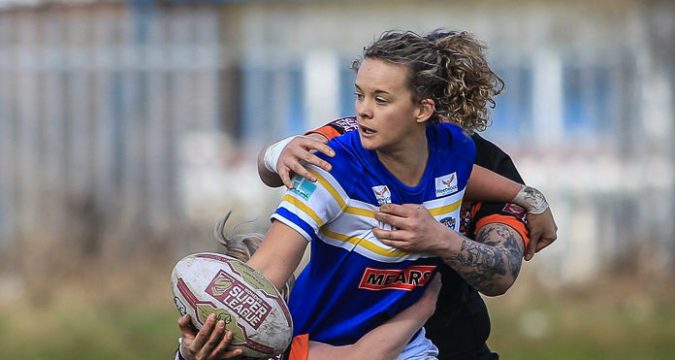 Leeds Rhinos Women’s captain Lois Forsell admits it will be a special moment for her when she takes to the field at Odsal Stadium on Sunday to kick-off the new Super League season.

Old rivalries will be reignited when the two clubs go head to head at Odsal for the first time in any competition since the Bulls were relegated from the men’s Super League in 2014.

And having grown up a Leeds fan, Forsell, who won the inaugural Women’s Super League title with the Bulls last year, cannot wait to finally pull on a Rhinos jersey.

“It’ll just be great to finally get out there,” Forsell told Totalrl.com.

“We’ve had rain, snow and waterlogged pitches that has meant we’ve had to cancel some of the pre-season games as well as last week’s scheduled league game against Featherstone.

“It’s been disruptive for us and as a new team, we’d have liked a bit more time out on the field than we’ve had. But we did get a first hit out against Castleford a few weeks ago which has prepared us and put us in good stead for Sunday.

“Bradford are the current champions so there is no better way to test ourselves. To be the best you have to beat the best so we are excited for the challenge and confident in what we can do.

“It’ll be a special day for me and many others because who would have thought that when we were fans in the South Stand or on the terraces at Odsal that one day we’d be playing in a Leeds v Bradford women’s derby.

“They are the games the professionals look forward to and we’re no different. Both teams are going out there to win and this will definitely re-ignite the old rivalries.

“There are a few of us at Leeds that were at Bradford last year so know the club well, but we’ll just be focussing on ourselves rather than on what we know about them. They are a strong squad and we know we’ll have to come up with a performance against them but we’ll stay focused on what we can do well.

“Games like this always brings something different and everyone pushes themselves that bit further. To finally represent my hometown club will be very special.”

The game is being billed as the headline match of an Odsal doubleheader, kicking off at 3:45pm after the Bulls have hosted Coventry Bears in a League 1 fixture.

Earlier in the day Wigan Warriors host Featherstone Rovers at noon, before St Helens face York City Knights at 2pm in what promises to be an exciting opening day of action.

“Everyone at every club is just excited to see the season start and it’s great to see how well all the games are being promoted by the clubs,” added Forsell.

“Bradford marketed their games really well last season and the way they are billing Sunday’s game as the main event is great.”