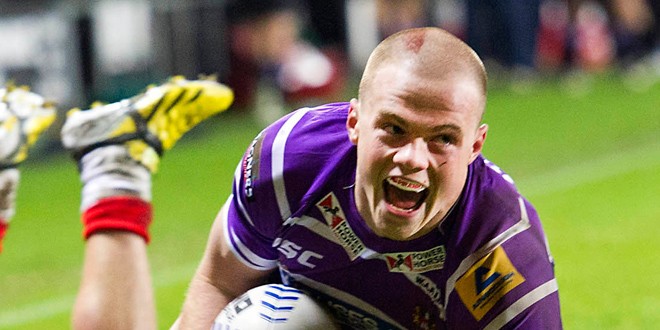 In a nutshell
St Helens’ unbeaten record was brought to an end in front of a sell-out crowd at Langtree Park, thanks to a polished all-round display from Wigan Warriors, who had just 14 fit players when the final whistle sounded.

How it unfolded
1’ – Louie McCarthy-Scarsbrook knocks on with the game’s first carry, thanks to an Iain Thornley tackle. Wigan get the head and feed.

2’ – Wigan get consecutive sets thanks to a Lance Hohaia touch that brings the tackle count back to zero. Sean O’Loughlin forces his way over from dummy half. Matty Smith lands the conversion: 0-6.

7’ – Jonny Lomax makes a break and puts in Tommy Makinson who hits back for St Helens. Walsh slots the touchline conversion: 6-6.

10’ – Matt Dawson has an outrageous try ruled out for obstruction, McCarthy-Scarsbrook shielding Luke Walsh in the build-up.

18’ – Blake Green puts Sean O’Loughlin into space who then finds Dan Sarginson on the wing, the former London Bronco going over un-touched. Matty Smith goals from the touchline. 6-12.

22’ – A Blake Green cross-field kick finds Joe Burgess who passes inside to Liam Farrell. The second-rower has a lot of work to do and beats Jonny Lomax then outpaces Turner to cross next to the posts. Smith converts: 6-18.

22’ – St Helens offside at the resulting kick-off, Greg Richards was at least five yards in front of Luke Walsh.

27’ – Tommy Makinson gets his 11th of the season and second of the day thanks to a long Luke Walsh pass. As Walsh lines up the kick, Eddy Pettybourne limps off and joins Iain Thornley on the sidelines for the remainder of the match. Walsh hits the post from the touchline: 10-18.

33’ – Jordan Turner looks to have lost the ball going over the Wigan line, but the video referee decided John Bateman had stolen it in a three-man tackle. Saints get the penalty in a strong position.

34’ – Turner goes over in the resulting set thanks to a great combination between Luke Walsh and Lance Hohaia. Walsh misses the kick: 14-18.

40’ – Wigan get a penalty for obstruction after Blake Green was held back by Greg Richards after kicking as the hooter sounded. Warriors opt to kick and Matty Smith lands the goal: 14-20.

41’ – The Wigan bench confirm both Eddy Pettybourne (calf) and Iain Thornley (torn pectoral) will not be returning to the field, leaving the Warriors with only two substitutes.

43’ – Wigan draw first blood in the second half. Burgess kicks the ball back inside into the path of Liam Farrell, who kicks the ball against Jonny Lomax and catches the ricochet to stroll over. Matty Smith adds the extras: 14-26.

47’ – The Warriors spread the ball out to the right in quick and efficient fashion, with youngster Joe Burgess on the end to sprint down the flank and get Wigan’s second of the half. Matty Smith’s kick puts Wigan three converted tries in front: 14-32.

52’ – Wigan concede a penalty after a slipping Greg Richards is flattened by a Sean O’Loughlin arm to the head. Although accidental, the incident is put on report.