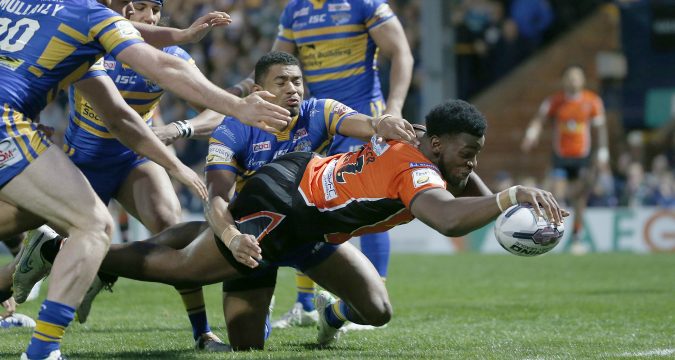 18 months ago, Gadwin Springer made the brave leap into the unknown by signing for Castleford Tigers.

The Guiana native was himself an unfamiliar name on these shores upon arrival, having only made a handful of appearances at Catalans.

However, Daryl Powell had spotted his potential. There was little doubting that he was a raw talent who lacked technical subtleties, but with undeniable strength and an imposing physique, Powell saw something special.

Springer’s opportunities at Catalans were limited, and as a result, he secured a move to the Tigers. Since then, his path to the top has picked up pace. An evident improvement has seen his rise to stardom accelerate at a quicker rate than many anticipated. His impact from the bench was another potent weapon in Castleford’s ever evolving arsenal, as the 23-year-old went toe to toe with the most formidable forwards Super League had to offer.

All of this has been achieved with Springer still acclimatising to life in England somewhat. The weather can still be an issue, he lacks confidence in his English, although he was fluent throughout a ten-minute conversation. His modesty is comparable to his thoughts on his own performances – while many are tipping him to reach the top, Springer is more concerned about actually getting a game.

“If I keep training hard and doing the good stuff and stay focused on my game I think I can do well. I think I could be better than I am.

“In our team now, it’s hard. I don’t know who is going to play because it’s a big squad, and if we’re injury free it’s going to be hard to get in the team. I’m just looking to train well and we’ll see at the start of the season to see if I get in the team. I know Daryl is looking at me.”

He may well have taken to life on the field at The Jungle seamlessly, however the cultural differences following his move to West Yorkshire have been more problematic.

“When I came here the first challenge was the weather and the English.

“In England there are different accents so it’s hard to understand. But things are going well now.

“In my first pre-season, it was just so cold. I couldn’t feel my hands or feet, but I’m getting used to it. I’m happy to be here and training with the boys. Castleford is a great team and I’m very happy to be in this team. I want to do well for this team.

“This year I’m just focused on playing better and playing more games. I want to be consistent. In my mind I think I can do it. But I have to keep training hard if these things are going to come.”

Springer’s relationship with Powell has been the cornerstone of his success. Then again, it isn’t the first time Powell has unearthed a gem.

“Daryl is a great coach. He knows what he wants from you. He can take you apart sometimes, and explain to you very well what he needs you to do. He knows how to make you confident and how to speak to players.

“For the moment, I want to stay at Castleford. I know Daryl can make me better. I’m settled here and everything is going well and I want to keep playing well. If I can stay, I want to stay.

“I’m very happy that I signed here. I’ve improved a lot in my game and I can be better than that too.”