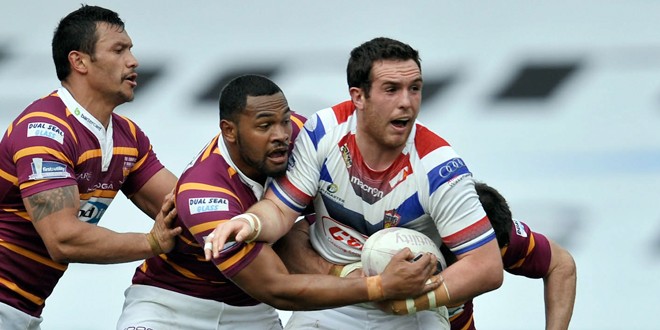 Huddersfield Giants and Wakefield Trinity Wildcats have agreed an undisclosed fee for prop forward, Daniel Smith, which has allowed the 22-year-old to sign a four-and-a-half-year deal with the Giants.  The move will be made immediately

The deal follows an agreement between the Giants and their current prop forward, Anthony Mullally, who will move to Belle Vue on loan to the Wakefield Wildcats for the remainder of the 2015 season.  Mullally will join Leeds in 2016

, meaning that he has played his last game for the Giants, whilst Smith will come straight into contention for Huddersfield’s trip to Catalans Dragons on Saturday.

Giants Managing Director, Richard Thewlis told www.giantsrl.com that the Smith deal had, in essence, merely been brought forward from a planned 2016 start.

“We have an excellent relationship with Michael Carter at Wakefield,” said Thewliss.  “And we had agreed some time ago with him that Daniel (Smith) would join us at  the Giants for 2016 and beyond.”

“Wakefield approached us to talk about ideas for new faces for their squad and obviously – with us being keen to get Daniel into our environment as soon as possible, Anthony having decided to move on from us in the longer term – a deal was possible to the end of this year which suited us all.

“Anthony leaves with our very best wishes for the future.  And I am sure that our fans will look forward to seeing Daniel put on our claret and gold shirt in the very near future.”