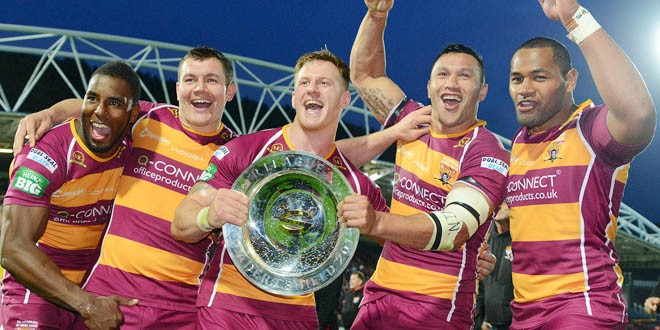 HUDDERSFIELD GIANTS assistant Kieron Purtill believes the squad have a different feel to the ones from previous years ahead of Friday’s showdown with West Yorkshire rivals Leeds.

The Giants can still finish top and know that a win against the Rhinos – coupled with a Wigan loss to Castleford – will ensure Huddersfield a second League Leader’s Shield in three years – and a spot in the World Club Series.

And after several years of disappointing form at the business end of the year, Purtill insists there is a different feel about this group than years gone by.

“There is a different feel about it,” said Purtill.

“We’ve got some different people in the group, it’s older and it’s generally a more experienced camp we’ve got now.

“Things off the field can help with that; family life and having kids helps you to learn to mature, and that can transform into what you do on the field. They’re maturing together and it’s exciting to see.

“It’s no secret our form in the play-offs hasn’t been good enough, but this year we seem to be peaking at the right time, we’re doing the right things and the group is confident we’re going in the right direction.”

Purtill has also insisted that they are trying not to focus on the table approaching the final round of fixtures.

“We’re not worried too much about it. We said we’ll see what happens.

“As coaching staff we’ve looked at the table and there’s so many permutations involved it’s so hard to work out. We just need to win our games and the table will take care itself. We’ve got confidence and we’re not afraid to go where we need to go.”

The Giants could yet have vice-captain Brett Ferres back for the semi-finals, after Purtell revealed he’s nearing full fitness.

“He’s not too far away now.

“He’s still got a few things to go through; his training his stepped up over the past week though and it’ll step up again soon. “There are still some progression steps for him to go through and hopefully in the next couple of weeks he could realistically give himself an outside chance of being fit for us.”