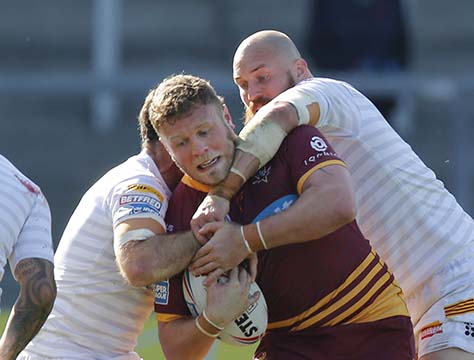 Huddersfield Giants forward Josh Jones could yet line up against his former club Salford in Friday’s Super League showdown.

Giants coach Ian Watson, preparing to meet his ex-employers for the first time, had feared the backrower faced a lengthy spell on the sidelines after picking up a leg injury at Wakefield last time out.

But scans showed the problem isn’t as serious as first thought, and the 28-year-old, who signed from Hull late last year, could be back sooner rather than later.

That’s a big boost for Watson, who left Salford to take the Huddersfield reins on a three-year contract in November.

Jones, who played three times for Great Britain in 2019, started out at St Helens and had a spell at rugby union club Exeter before kinking up with Watson at Salford in 2016.

He played in the 2019 Grand Final defeat by St Helens before his season at Hull, and had been in good form for Huddersfield.

“He doesn’t usually stay down, so I was panicking when it happened, but it’s not as bad as we thought,” said Watson, whose side had won three league games running before their 38-12 setback against Wakefield.

“We’re just checking regularly on Josh and seeing how the rehab is going and how he’s feeling.

“The Salford game might be a bit too early but you never know, he’s usually a quick healer, so he could make it.”

It will be Huddersfield’s first home game since the return of spectators in limited numbers after Friday’s scheduled clash with Wigan at the John Smith’s Stadium was postponed due to Covid issues within the Giants’ squad.

Huddersfield have recalled winger Louis Senior from his loan at Oldham.