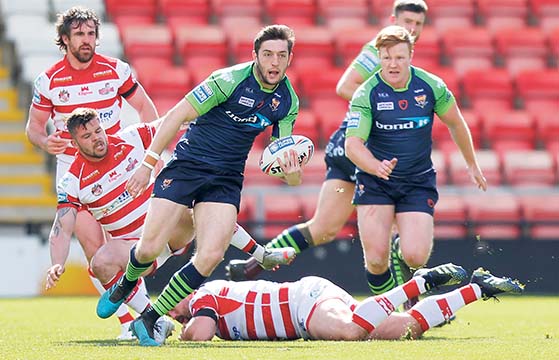 Jake Wardle believes Huddersfield should still target the play-offs despite a catalogue of injuries, four consecutive losses before the forfeiting of the home Super League clash with Castleford and now a ten-match ban for forward Kenny Edwards.

The New Zealander has been ruled out until September for putting a finger up the rear of Catalans prop Sam Kasiano during the 50-12 home defeat by the French side.

In the wake of the announcement, Watson brought in Leigh due (hooker) Nathan Peats and (prop) Nathaniel Peteru on season-long loan deals, with (prop) Jack Ashworth going the other direction.

The new arrivals went straight into the squad for the Super League visit to Wigan, who visit Huddersfield on Friday for a quick return fixture.

Second rower Edwards was charged by the RFL’s match review panel with a Grade F offence, the most serious available to it, for “other contrary behaviour” and referred to an independent tribunal, which handed out the punishment following a hearing.

It keeps the former Catalans player out until September.

It’s been a tough first season at the helm for coach Ian Watson following his trans-Pennine switch from Salford.

The Giants’ 44-6 win at Leigh was only their third in Super League, with defeats by Wakefield, Salford, Hull and Catalans following.

Then came the cancellation of the home clash with Castleford, who were awarded a 24-0 win after Huddersfield said they were unable to field 17 players, but didn’t meet the Covid-postponement threshold of seven missing though positive tests or the need to isolate.As with Castleford’s withdrawal from their previous scheduled match, which was awarded 24-0 to St Helens, the failure by Huddersfield to fulfil a fixture was referred to the RFL’s compliance department as off-field misconduct.

Centre Wardle, who missed out on the chance to play for England against the Combined Nations All Stars last month due to a foot problem, said: “Obviously, we’ve got a few injuries, especially to our spine, and we made too many errors against Catalans.

“But we are all confident we can pull each other through. We have the belief among the squad still.”