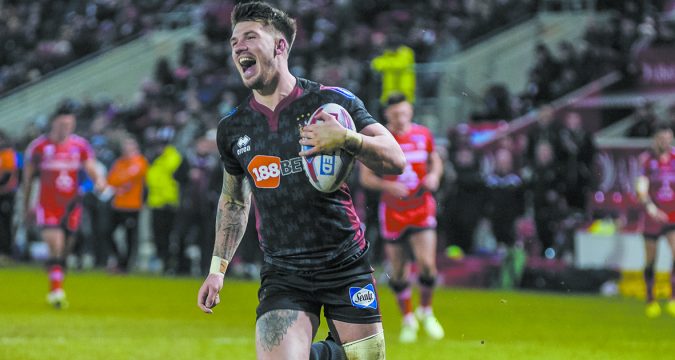 Oliver Gildart is determined to get one over Saints counterpart Mark Percival as the two prepare to battle it out for England selection.

The duo will lock horns in Friday’s highly anticipated derby contest, with the two left centres both keen to showcase their abilities to England selectors ahead of the mid-season test in Denver.

The pair look likely to fight it out for the same spot in the England setup for the next number of years, a fact not lost on the 21-year-old.

Gildart, who earned England recognition for the first time with his selection in the England Knights squad, admitted he is desperate to get the upper hand as the Warriors look to extend their Good Friday winning streak.

“I’m over the moon to be in the Knights set up but I want to cement a spot in the first team. In big games like this you want to pick your form up and impress,” he said.

“Mark’s a great player and one of the best players in the competition, certainly in my position. These are the games we have to try and out-do each other. It’s a test in every game against the centre you face and you want to be better than them, but when you come up against other international lads it comes with more pressure.”

The strong start to the campaign for the two sides has made this fixture one of the most anticipated Good Friday derby matches in years, and Gildart insists the Warriors know all too well the enormity of the occasion.

“It’s the top two teams and it adds more pressure if that’s possible. We’ve not lost this game in years and we want to carry that on.

“We have a thing about this Easter period and always coming out on top. It’s something we take personally and there’d be nothing better than doing Saints at their own place.

“I’ve had messages from Saints fans giving it me and you get that. As a player you have a respect for the opposition, they’re a great team with great players, I used to go school with Luke Thompson but on the field he’ll be trying to belt me, I’m not big enough to belt him so I’ll have to step him. But the two towns hate each other.”