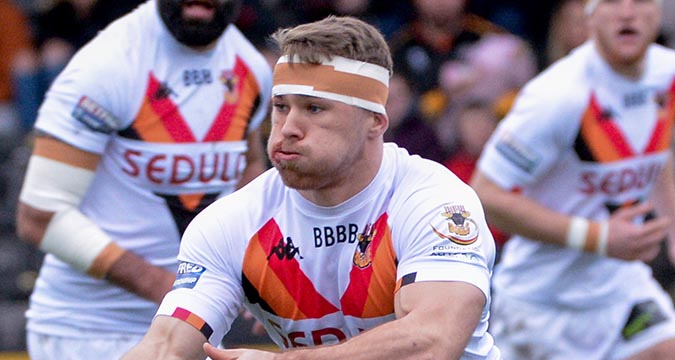 Bradford Bulls hooker Sam Hallas has said the past year has reinforced, for him, the importance of having something to fall back on when his rugby days are behind him.

He may still be only twenty-four years old, with many more playing years ahead of him, but multiple lockdowns and very little training over the last twelve months have given him a taste of what life could be like once he’s hung up his boots.

He has been far from idle during his down time, however. He has continued to study Sport Business Management at Leeds Beckett University and has also been getting his hands dirty working for team-mate Steve Crossley and his window cleaning service.

“Lockdown has definitely shown the importance of having something to do away from the game.

“When Lee Smith was at the club, he would get into me and say: “Look, rugby doesn’t last forever. Even if you’re at the top for ages, you’re still going to need something to fall back on.”

“That really resonated with me and I knew I needed to get something else behind me.

“It’s really important for all players that they have an eye on the future. We can’t be one dimensional and see ourselves as just Rugby League players, we need to have a few more strings to our bow.

“It’s better that I’m getting things in place now rather than twiddling my thumbs and then panicking as I get to the back end of my career.

Hallas’ first competitive game in over a year will see him go up against Featherstone Rovers in the first round of the Challenge Cup on Sunday, March 21. And there is more at stake for him in that match than simply a win and a second round tie against either Halifax Panthers or Batley Bulldogs.

“Featherstone Rovers coach James Webster is one of my seminar tutors, so if we beat them in the Cup, it’ll be class when I see him at Uni.”