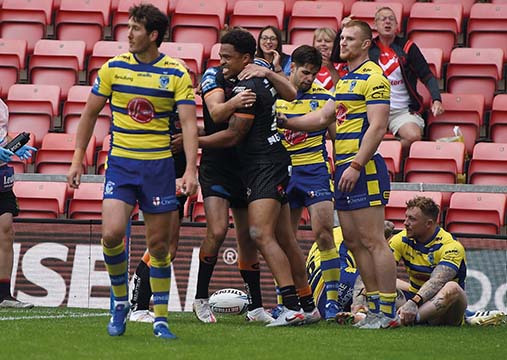 And no celebration was greater than that of three-try hero Jordan Turner, who ran across to his family in the stands at Leigh Sports Village on Saturday after helping side side seal a Wembley clash with his former club St Helens.

He dedicated the win to his grandfather, who was watching at home.

“I wanted to be with my mum, my wife and my stepdad,” said Turner, who has also played for Salford, Canberra and Huddersfield.

“This has been a long time coming. We didn’t know whether this moment had gone for us.

“I hope I’ll be able to take the trophy over to them at Wembley and that my grandad and my kids will be there too.”

Turner, 32, who made his Super League debut for Salford as a 17-year-old in 2006, was signed by Castleford ahead of this season.

Although he enjoyed Grand Final glory with St Helens in 2014, he has never played at Wembley.

“It feels amazing. I’ve dreamed of this moment since being a young boy,” he explained.

“Every year we had a family trip to Wembley. I went down in 1999 to the last final at the old stadium and I’ve been to the new one.

“It’s a dream for me and my family and also for the team. There was a lot of emotion riding on it.”

Asked about the astonishing improvement shown by Castleford in just eight days, Turner responded: “We just said we had to forget about it (Leeds).

“There was a lot of emotion for players who have been here a long time and might be finishing at the end of the year. We found an extra five per cent and the players who came into the side are big-game players and they came up trumps.”

Castleford, meanwhile, are reportedly lining up moves for Hull winger Bureta Faraimo and Leeds centre Alex Sutcliffe for next season.