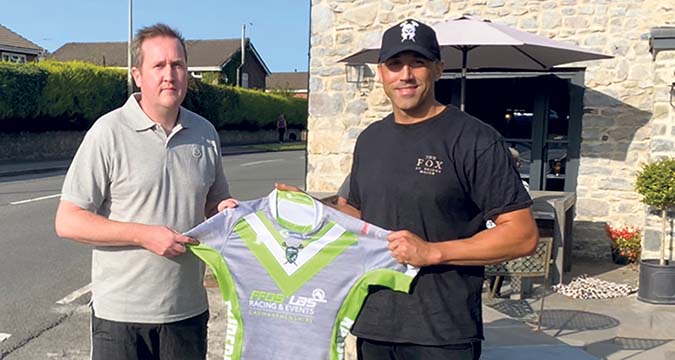 Gavin Henson is not making any bold predictions about a place in Wales’ World Cup squad after his first training sessions in Rugby League, although he is keen to play in the Challenge Cup, when it gets under way next month.

The former Wales and Lions rugby union international will play in League 1 for West Wales Raiders this season after coming out of retirement.

The 39-year-old has not played any form of rugby since February 2019, and he admitted last week that the physicality of training in Rugby League has taken him aback.

As such, he isn’t yet thinking about the prospect of a World Cup at the end of the year – although he admitted it will become a target if he adapts to the switch in codes.

Henson said: “It’s an obvious one that people will talk about, but I think they might need to watch me in training first; I’m a bit off it.

“If I can get into the (Raiders) team and play my first game then let’s see where we’re at.

“I might be a million miles off, but if I am pretty good out there and have still got some running left in these legs then, yeah, I’ll be looking at that myself.

“But I’m not thinking that way yet – I’m just looking to get into the team for the Raiders, complete a game and see what my levels are like, if I’m any good for this or not.”

One player that has caught Henson’s eye who is almost certain to be involved in the World Cup is St Helens’ Welsh-born winger Regan Grace.

“I wouldn’t want to defend him, he looks rapid, to be fair.

“He looks lightweight compared to everybody else, but he’s probably quite big in person and no one can put a hand on him.”

He hopes that both he and fellow high profile recruit Rangi Chase can lift the club to new heights in 2021.

Henson added: “There’s been a lot of stuff happening off the field which has been positive, but the main thing is on the field.

“It would be great if Rangi and I can have a bit of an influence and bring something into it, just to take us up to another level, which is maybe what we need.

“If we can do our talking on the field, if we can take a scalp, that would be great.

“People would probably respect us a bit more and youngsters coming through might start looking more at Rugby League as well.”

The immediate question is whether Henson will play in the first round of the Betfred Challenge Cup, in which the Raiders have a home draw against Widnes Vikings on the weekend of 21 March

“I spent a lot of time with Martin Offiah on a certain TV programme, ‘The Hunted’, and he was forever telling me about his statue at Wembley and, to be fair, I can remember watching some of his greatest moments at Wembley on TV.

“He’s told me all about it and that probably made it even more interesting in to be honest.

“It will be great to play in the Challenge Cup game in March.”