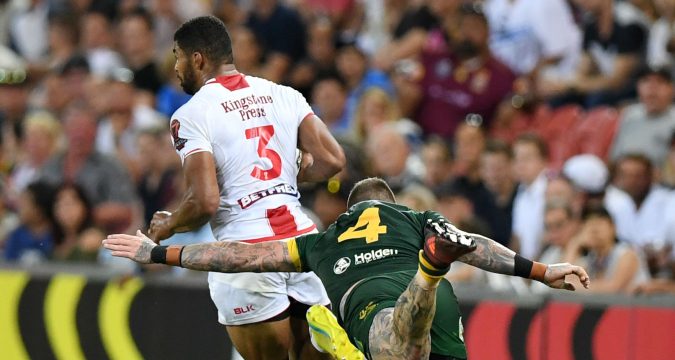 Australia picked up their eleventh World Cup crown after edging past a spirited England 6-0.

Wayne Bennett’s heroic side came agonisingly close to upsetting the Green and Gold, but a stunning defensive effort containing plenty of scramble defence saw Boyd Cordner’s first-half try be the difference by the end.

England, despite falling to the same old outcome, lost this game in a far more agonising, unpredictable manner to those of yesteryear. England grew into the game and, had it not been for a number of missed opportunities, could have been lifting the trophy at the end.

But the relief etched across the faces of the Kangaroos at the final hooter symbolised the nature of the game they had been in. Australia had, beyond anything else, survived.

Of course, the Kangaroos were imperious too but they were required to dig deeper than they have in recent memory. In the end, it was their heroic defence, rather than their world class attack, that was the difference.

A tight first-half was ultimately turned by one penalty to Australia, which put them on the front foot. But like a boa constrictor, the Kangaroos strangled England into submission with repeat sets, and eventually, Cordner crossed over.

England recovered however and had two dangerous sets close to the Australia line, only to lose possession early in the set.

Sadly, the second-half was more of the same. England posed plenty of questions but, Australia had an answer to all of them.

The best chance of all was for Kallum Watkins, has weaved through the defence with a trademark diagonal run, only to be ankle-tapped at the last possible moment by Josh Dugan.

Ultimately, that proved to be the moment that condemned England to heartbreak.