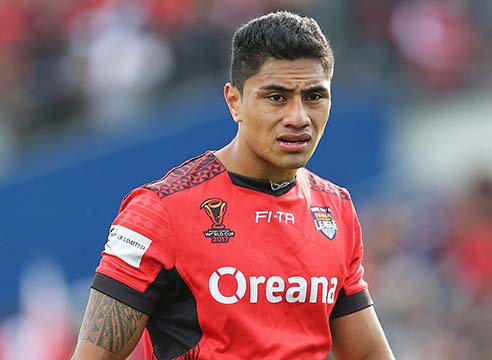 Salford Red Devils director of rugby Ian Blease says the addition of Tongan international halfback Ata Hingano to Richard Marshall’s squad is a sign of the club’s determination to stay in Super League.

Confirmation of the recruitment of the 24-year-old, who has NRL experience with New Zealand Warriors and Canberra Raiders and has been at Queensland Cup side Mackay Cutters, was followed by Friday’s morale-boosting 9-8 win at Huddersfield.

Hingano has agreed a deal until the end of the season with a two-year extension option.

He played scrum-half for Tonga in the 2017 World Cup semi-final defeat by England and has made eight international appearances in all.

He played once for the Cutters before the 2020 campaign was cancelled, and after having a trial at North Queensland Cowboys ahead of the current season, he returned to make ten appearances this time around.

Having reached the Grand Final in 2019 and the Challenge Cup final last season before the departure of coach Ian Watson to Huddersfield, Salford have managed only two league wins out of ten this season.

They are currently without halfback Kevin Brown because of an ankle problem.
Brown has announced he will retire at the end of this season, and with Tui Lolohea tipped to be reunited with Watson at Huddersfield, Hingano has the opportunity to cement a place in the squad.

Blease said: “With our injury list not improving for some weeks yet, it is important that we show our supporters and sponsors that we are determined to compete at the highest level.”

Watson’s successor Marshall said: “Ata is a brilliant addition to the squad.

“He promises to be an exciting player who despite still being quite young, will provide a good level of experience and knowledge.

“He’s a great organiser and kicker and he’ll complement our existing halfbacks.

The Cutters said on their Facebook page: “We’re all so proud of Ata and from the club, we’d like to wish him the best as he moves overseas, we have no doubt he’s going to do some great things over there.”

Hingano made his New Zealand Warriors debut in 2016 and played for Junior Kiwis that year.

His Tonga debut came in 2017 and he joined Canberra in 2018, only for his NRL career to stall, resulting in the move to Mackay Cutters.