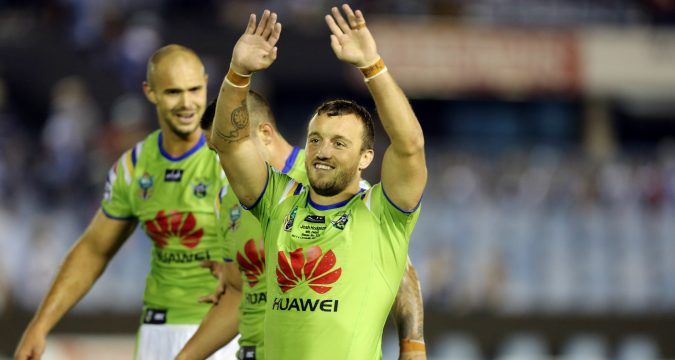 England forward George Burgess made headlines last week when he took a hit at Australians looking to play for England for the “wrong reasons” – and now a fellow NRL-based Englishman has joined those calls.

Canberra and England hooker Josh Hodgson, who is in the hunt for the prestigious Dally M Medal this year, has had his say on what is rumoured to be a controversial selection policy from new coach Wayne Bennett.

Although no Australian-born player has actually declared a switch in allegiance yet, players like Darcy Lussick and the Morris twins are believed to be on the radar of England – and Hodgson insists that if they are trying to switch because they know they can’t play for Australia, they shouldn’t be considered for Bennett’s side at all.

“I’ve had a fair think about this because I’ve got a son and he’s born in Australia and he may never go to England to live there the rest of his life,” Hodgson said.

“But if he grew up and said he wanted to represent England, and he was proud to be English because his mum and dad are English, then I don’t see what the issue would be.

“But in terms of someone who hasn’t got much English background and they’re doing it because they can’t make another squad, I just won’t be a fan of that.”