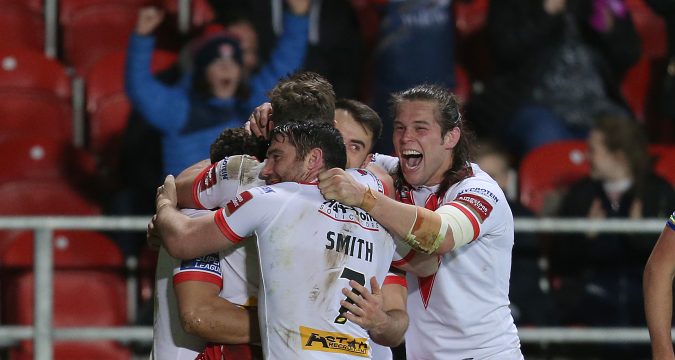 The Saints trailed 24-8 heading into the final 10 minutes – and 24-14 with just three minutes left – before tries from Regan Grace and Jonny Lomax allowed Smith to secure victory with his one-pointer to beat the Red Devils.

And all of that left Holbrook a satisfied coach. He said: “It was fantastic to see that sort of finish. I’m just as excited as the players.

“I know it’s easy to say because we won but I was always confident that we had a chance. I thought we were unlucky not to have led at half-time and in the second it was all Salford. I think they completed every set and didn’t give us a chance.

“It was very gutsy from us. It is great for the players to have that belief to finish like that.”

Meanwhile, Salford coach Ian Watson admitted his side were taught a brutal lesson as they fell further behind league leaders Castleford.

He said: “It was a tough lesson and a tough way to learn a lesson.

“We didn’t play particularly well in the first half but we rectified that in the second. We started to play with resilience in defence but in the last 10 minutes it was like we’d already won the game.

“If you do that against any good team you’re going to get bit. We need to take that as a lesson and learn it pretty quickly because the further you get down the track there are going to be big games where we need that arm-wrestle mentality.

“I thought Todd Carney controlled the game along with Rob Lui and we got into a big lead but we shouldn’t be giving that lead up.

“It’s tough to take but we will put it to bed and learn lessons for next week.”