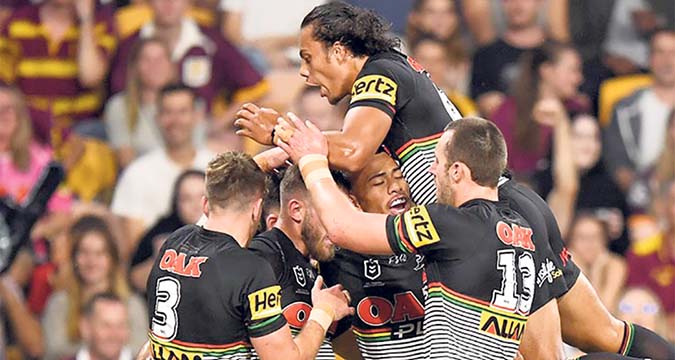 There’s been a lot of publicity recently about the new rules that we’ve seen operating in Rugby League this season, both in the British game and in the NRL.

And generally speaking I think it’s fair to say that there’ a lot of antagonism, as far as I can see, among Rugby League supporters to the new rules.

Many people, for example, don’t like the new rule about ball stealing, whereby a player can steal a ball from an opponent if his team-mates who are also engaged in the tackle drop away from it so that there is only one man in the tackle when he steals the ball.

We’ve already seen a lot of it this season, with Leeds Rhinos being the first to do it, and other teams having copied them.

Like most new rules these days it originates in the NRL, and it was exploited brilliantly last season by Canberra Raiders, and in particular by their English star Josh Hodgson.

Then there is the two-point field-goal that is awarded if a field-goal is kicked from 40 or more metres out from the posts.

That rule came into the NRL only this season and already we have seen three examples – two of them from Adam Reynolds of the South Sydney Rabbitohs and one from Nathan Cleary of the Penrith Panthers.

All three of those field-goals came at crucial points in their respective matches and all of them had a crucial bearing on the outcome of those games.

That rule wasn’t adopted by the RFL at the start of the season and I’m not sure what its reasons were for not doing so.

But there’s no doubt plenty of resistance to the ball-stealing rule, with lots of fans making their views known in various forms of media.But I’m not so sure we should rush to condemn this innovation, or any others.

When considering a new rule, the question is always how it will impact on the game. Will it make it better, more entertaining and enjoyable, or will it make it worse?

In my view, the crucial question is whether a new rule increases the skill level required by a Rugby League player.

So let’s consider the new ball-stealing rule in that context.

When, say, we see an attacking player being tackled by three defenders, the lead tackler now, if he wants to steal the ball, has to shout to his fellow tacklers to fall off the tackle and at that moment he has to pinch the ball.

That strikes me as a highly skilful operation.

And the object of the tackled player must be to keep hold of the ball and take advantage of the fact that a couple of defenders might have dropped off the tackle.

In either case, it seems to me that a high level of skill is demanded if either the defender or the attacker is to achieve his objective.

It’s certainly more skilful than the previous rule, whereby a defender couldn’t steal the ball under any circumstances if there were two or more defenders in a tackle.

The new rule can suddenly change the direction of a game.

And that makes it exciting.

And I feel similarly about the two-point field-goal.

Anyone who has seen the NRL matches in which those field-goals were kicked couldn’t fail to admire the skill of the players who kicked them.

And it was obvious how much the spectators appreciated them.