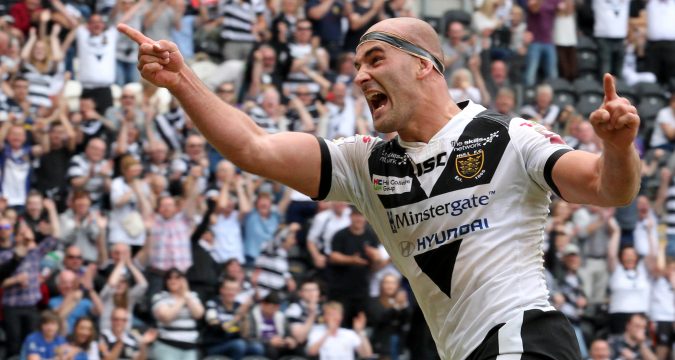 It takes a champion team to successfully defend the Challenge Cup – that’s the view of Hull hooker Danny Houghton, who insists the Black and Whites are just two games away from something altogether special in the competition.

Hull fans will never forget the scenes at Wembley 12 months ago when they lifted the Challenge Cup at the national stadium for the first time – and Houghton admits it is likely never to be exceeded in terms of significance.

But he told TotalRL that while good teams win trophies, only the very best are able to defend them – a run Hull will hope to move a step closer to achieving today when they face Leeds in Doncaster.

He said: “When you win a trophy everyone wants to knock you off your perch. Good teams win trophies: it takes a champion team to defend something when everyone’s trying to shoot at you from all angles.

“It meant a lot to us last year, and we’re not really in the mood to give up that trophy to anyone else yet. It will be special for different reasons, obviously, if we can do it again this season.”

Saturday’s game has all the hallmarks of a huge afternoon for both the competitors and the sport as a whole. A sell-out crowd, a fierce Yorkshire rivalry and the prize of a trip to Wembley for the victors: and the occasion is not lost on Houghton. “We all can’t wait now,” he admitted.

“The intensity has stepped up in training as it’s a really big game, you can feel it around the club and around the city. We’re looking forward to getting out there on Saturday afternoon now and hopefully getting the job done.

“You can feel it’s a big one; it’s harsh to say I guess but with the rigours of Super League every week, you can sometimes take that for granted – but once games like these come around you know you have to be at your best. It’s the kind of challenge we thrive upon at Hull, especially after last year.

“This is why you play the game, isn’t it? It’s why you want to be a professional and why you grow up dreaming of playing in the Challenge Cup and nothing else.

“For the players, it’s a competition that is still very special to us all. Playing in Super League is special in itself but the big games in front of big crowds with big prizes on the line? That’s why we’re all here. We need no motivation for this.”

The defining memory of Hull’s run to cup glory last year was, inevitably, the final. But Houghton admits the semi-final – the stage Hull find themselves at again today – has a special place in his heart too.

He admitted: “The semi-final last year was really special – I understand everyone only remembers the final but that semi-final will live with me for a long time.

“You factor in what was riding on it for the club, with people talking about the Wembley hoodoo and the chance to go and end it, and to overcome a champion team like Wigan in the way we did was a massive boost for everyone.

“I think it gave us that belief that no matter who we played at Wembley, we were good enough to win the game and win that cup. That was our best performance of the season: let’s hope Saturday proves to be the case again.”