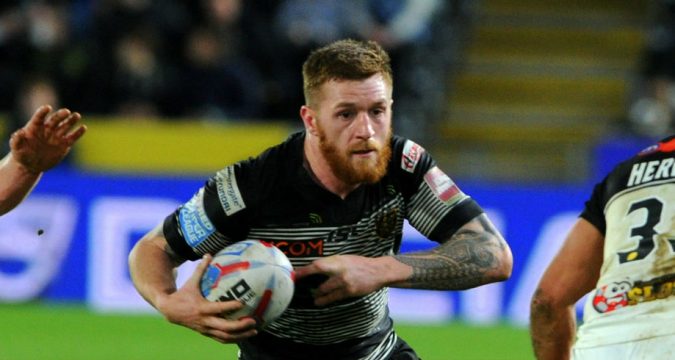 Hull FC won at Wembley to clinch the Challenge Cup trophy for a second time in a row. The Black and Whites defeating Wigan Warriors 18-14 in an enthralling final.

A man of the match performance from Lance Todd trophy winner Marc Sneyd, two tries from winger Mahe Fonua and one for Fetuli Talanoa were enough for Hull despite a fierce Wigan comeback late on.

Hull FC weren’t to be down for long. In the 12th minute, Hull kept the ball alive for Sneyd to kick to the left corner. Talanoa jumped highest to claim the try. Sneyd improved the try to level the scores.

It was Sneyd again that was to prove the thorn in Wigan’s side. After Minichiello was held up just short, Sneyd kicked to the right this time and Fonua was there to pounce for the Black and Whites. The half-back was again on target from the tee to give Hull a 12-6 lead.

Wigan were to score however before half-time. A long sweeping move to the left found George Williams, the pivot fed Oliver Gildart who notched for the Warriors. Williams was unable to add the extras leaving Wigan two points behind at the break.

Sneyd’s kicking was causing havoc for Wigan. After forcing a drop out, Sneyd kicked to the right for Josh Griffin but the centre dropped the ball with the line at his mercy.

It may have been Sneyd pulling the strings but it was Albert Kelly who set up Mahe Fonua on 48 minutes for Hull to stretch the lead. Sneyd’s kick from the right touchline brought Hull eight clear of their opponents.

Hull thought they had extended their lead through Fonua but Phil Bentham’s decision of no try was upheld due to an obstruction.

A Tony Clubb try was also disallowed for the Warriors this time, video referee James Child ruling the prop had dropped the ball.

With seven minutes left on the clock, Wigan clawed their way back into the game. Winger Joe Burgess receiving a cut out ball from Liam Farrell to stroll over. Williams was off target with his conversion meaning Wigan were still four behind.

With seconds remaining, Wigan thought they had won it when Farrell found Burgess again but an earlier pass from George Williams was called forward. Hull FC hung on to claim a second Wembley triumph in a row.

Full coverage of the Challenge Cup Final will feature in Monday’s issue of League Express, available in the shops and online from Sunday evening.