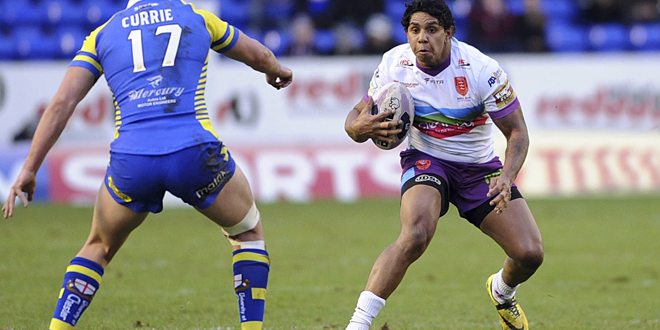 Hull KR have announced they have sold more than 6,000 tickets for the Ladbrokes Challenge Cup semi-final at Headingley Carnegie Stadium.

Rovers will face Warrington Wolves on Saturday, 1st August and the South Stand has proven to be the most popular section of the ground with supporters hoping to see the Robins book their place at Wembley for the first time in almost 30 years.

With an initial allocation of tickets for the South Stand snapped up by 2015 members during the priority purchase window and an extra 300 tickets selling out within minutes of going on general sale, the club has since explored all possible avenues with the RFL to free additional space within the stand.

The club have since confirmed that 100 South Stand tickets have been released for general sale by the RFL’s Challenge Cup commercial partners and these will go on sale online at www.hullkr.co.uk/tickets from 7pm tonight. There will be a maximum of two tickets per transaction and no ticket swaps will be allowed from other sections of the ground.

Hull Kingston Rovers CEO Mike Smith said: “On behalf of the club and our supporters, I would like to thank the RFL and their commercial partners for this kind and generous gesture.

“This has allowed us to give supporters one last chance to buy for this area of the ground, but I cannot stress enough that this will be the final opportunity for fans to purchase tickets in the South Stand. Once these final 100 tickets are sold, there are simply no more available.

“We’ve been working closely with the RFL to release as many tickets as possible for this stand but ultimately we have taken both their advice and the suggestions of Leeds Rhinos on board on what will be a safe and comfortable number of fans to have in that area on matchday.

“This is much different to a normal Leeds home game where a certain percentage of season ticket holders won’t be able to attend for whatever reason and with a greater proportion of families expected in there for the semi-final, we need to be sensible in terms of numbers and match them to the amenities that will be available.

“We appreciate that some fans will miss out on being in the South Stand on August 1st but we have had to prioritise tickets for members and as with all of our big games such as the Hull derbies and our season opener, we always recommend fans purchase early to guarantee their place.

“There will now be a limited number of tickets for the South Stand available and after that we want fans to buy tickets in the Western Terrace. We need supporters to get behind the posts in that area of the ground and get behind the boys on matchday. Let’s make three sides of the stadium Red and White for the semi-final and sing in unison to hopefully give the players a real advantage.”

Mark Foster, Director of Marketing at the RFL, added: “We anticipated there would be a strong demand from Hull Kingston Rovers supporters to be in the South Stand on semi-final day and with this in mind we worked closely with the club to ensure every member would have the opportunity to get a ticket during the priority window.

“We have been very pleased with the demand for tickets in this area of the ground since going on sale but we have to ensure there is the right balance of fans across the stadium, based on our experience of hosting a number of high profile events at Headingley in the past.

“We are also conscious that the BBC will have a studio position within the South Stand that will reduce the space available to us, but suggestions that only half the capacity has been allocated are incorrect.

“To put it simply, we have released as many tickets as possible, aided by this kind gesture from several of our commercial partners to relinquish their own allocation of tickets in this stand for general sale. They could have used these tickets for their own promotions but have worked with us to allow as many Rovers fans as possible to purchase tickets in this area and our sincere thanks go out to them for their support.