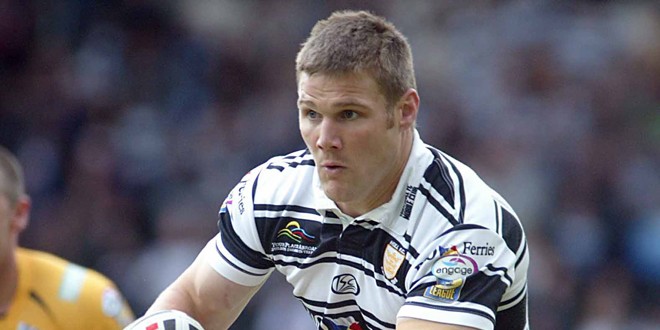 Hull FC star Kirk Yeaman is optimistic that the current crop of youngsters making their way through the ranks at the KC Stadium will see the club based in West Hull developing a reputation alongside Wigan, St Helens and Leeds as a producer of outstanding young talent.

And Yeaman, 30, who made his Super League debut for Hull as a 17-year-old in 2001, admits that he has never felt as excited as he does now about the young talent at the club.

“It’s great to see so many youngsters coming through and being given their opportunity in the first team like I was, and it doesn’t just bode well for the future, it bodes well for now,” Yeaman told League Express.
“Jamie Shaul, Chris Green, Dean Hadley and Josh Bowden are establishing themselves as current first-team players and there are plenty more beneath them fighting for a place. If we keep producing these players, then one day we could have a full team of Hull-born players, which would be brilliant.
“These kids are taking their chances. Josh, for example, wasn’t guaranteed anything at the start of the year but has since been awesome in the pack for us. That’s a credit to Radders (Lee Radford) because when he took over he said we’d be starting from scratch and everyone was on the same level. He’s kept his word and he’s selected the players that have impressed him the most.
“I don’t think it can get any better than having both your coaches from Hull. Between them there’s a lot of passion, and they bring all that kind of stuff to the table. Radders has brought in all these new ideas and everyone’s buying into them.”
Yeaman has been a cornerstone of Hull’s outside backline since making his debut. But he’s not exempt from criticism, and that was seen when Radford was incensed by his centre’s display a month ago in the 7-0 home defeat to Widnes.
“I knew that I didn’t play well that day and I’ve been around long enough to know when I’ve been good or bad. It was down to me to knuckle down in training and put in a better performance the week after (against Salford), which I feel I did.
“Barring the Widnes game, I’m pretty happy with how my form is going.
“I’d like to get my hands on the ball more often in good positions, because I seem to be doing all the hard stuff like yardage carries, but I think my defence has been spot on so far.
It’s a dream job and I still have to pinch myself every now and again that I’m still doing it at my age at the highest level.”