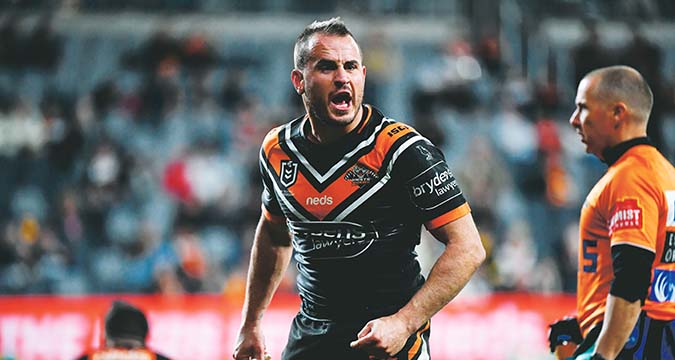 The playmaker has signed a two-year deal with the option of a third to become Brett Hodgson’s first signing since becoming the club’s head coach.

Hodgson had prioritised a new halfback ahead of the 2021 campaign and has turned to a familiar face after pair spent the last several seasons together at the Tigers, where Hodgson was assistant to Michael Maguire.

The 31-year-old, who has made 160 NRL appearances and represented New South Wales four times, had held talks over a move to Super League earlier this season.

“I’m really excited and proud to be joining a club like Hull FC,” he said.

“They’re a big club with great heritage and a very passionate set of fans.

“I’ve heard a lot about the club and their vision which is exciting and I’d love to get over to the UK and try and win a trophy with them.

“They’ve won the cup a couple of times recently which looked like great occasions to be part of and so do the Derby games.

“The stadium looks class. I can’t wait to run out there for the club and start the next chapter in my career, I’m really ready to rip in and get started. I’m excited about what the next few years has in store.”

Hodgson added: “Josh is an elite player. He builds his game around work-ethic and effort, and that’s what we are after here at the club – he’ll be a real leader for us.

“He’s played Origin, Grand Finals, and Prime Ministers XIII matches – he’s been involved in the game for a long time – he has played at the highest level and he will bring that experience with him.

“He is the sort of player who will bring out the best in the other players around him – the opportunity to see him work together on the field with Marc Sneyd is really exciting. They can complement each other really well with their two different skill-sets; he is a runner of the ball and will find opportunities to attack out of nothing.

“Josh is a passionate guy, and when he sets his sights on what he wants to achieve, he will excel. To have him in Black & White is a really exciting prospect for the club.”

Reynolds started his career with Canterbury, playing in two NRL Grand Finals with the Bulldogs. He moved to the Tigers in 2018 but hasn’t been a regular during his time there.

Meanwhile departed Hull FC star Albert Kelly has made a shock move to Brisbane Broncos, where he will undergo a trial period with the club before the Broncos decide whether to make him a formal offer.

“I remember watching an interview with Kevvie Walters saying he wants the club to be playing finals footy next year,” Kelly said.

“That kinda struck up a fire in myself to get back home and give it a shot at the Broncos.

“To come in and bring a bit of my experience to the team, I think it’s a good fit for myself and the club. There is a lot of hard work ahead, which I’m looking forward to.

“Nothing is set in stone, so I’m looking forward to the challenge.”