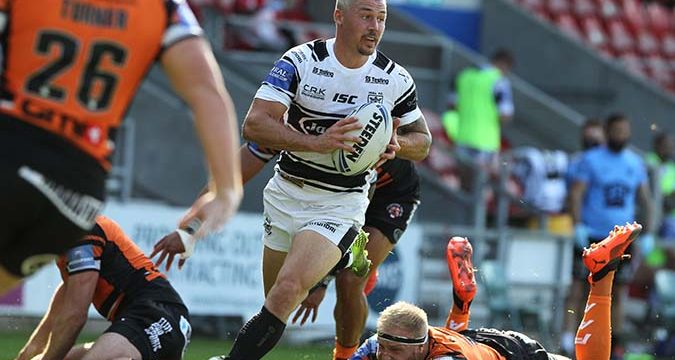 Hull FC are sweating on the fitness of Jamie Shaul with fears that the fullback has suffered a dreaded anterior cruciate ligament (ACL) injury.

Shaul was withdrawn during the Black and Whites’ victory over Castleford and the club is waiting on scans they hope don’t confirm their worst fears.

Shaul has been the club’s first-choice fullback since 2014 and played a pivotal role in their back-to-back Challenge Cup Final successes.

But an ACL setback would see him miss a large chunk of next season and could force the club into the transfer market to find an addition to their spine options.

Albert Kelly is leaving, young halfback Liam Harris is heading to Halifax while Kieran Buchanan, who has previously filled in at fullback, is on his way to Batley.

Specialist fullback Connor Wynne remains with the club, but a lack of cover in both positions could be a cause for concern that prompts the club to recruit.

Shaul is closing in on 200 appearances for the club and is understood to have signed a new contract for next season, though it has yet to be announced.

It would as a blow to Hull’s prospects for the rest of the season too, with the Black and Whites recently recording back-to-back wins for just the third time this season.

Victory over bitter rivals Hull Kingston Rovers on Thursday would result in their longest winning sequence since June 2019.