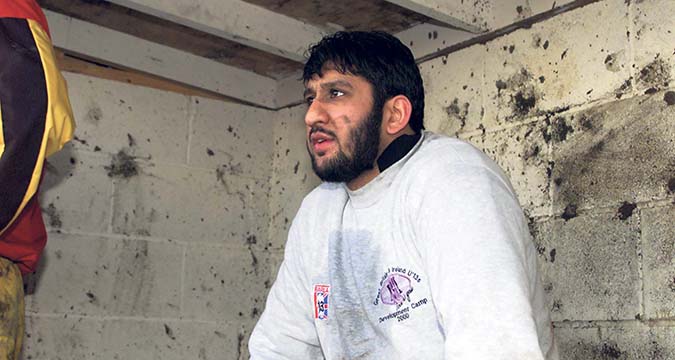 There are few Rugby League personalities with a more interesting story to tell than Ikram Butt.
Raised in the shadow of Headingley Stadium, he signed for Leeds as a teenager, but would find first-team opportunities more prevalent at Featherstone Rovers. In 1995 he became the first Muslim to play Rugby League or Union for England and he signed for London Broncos, although a short stint in prison blighted his time in the capital.
Butt figured in Huddersfield’s promotion season of 1997 before he wound down his professional career with Hunslet.
But it is his post-playing feats that have been truly remarkable. They include the formation of the British Asian Rugby Association, meeting the Pope and his never-ending work for good causes. This is the first of a two-part interview.

I’m lucky that I have a lot to choose from, but in 1995 I became the first Muslim to play either code of rugby for England when Ellery Hanley selected me to play in a European Championship match against Wales.
It was such an amazing experience and even now I look back very fondly on the occasion and consider how fortunate I was to be given the opportunity to wear the national jersey.
It was surreal how it all happened. At the time I was working at Yorkshire Copper Works, where a lot of famous Rugby League names worked. Thanks to my former coach and mentor Peter Fox, I was employed as a quality control inspector along with my team-mate at the time, Andy Fisher.
I was informed of my England selection through the media and the next thing I knew, I was being whisked to the studios in Leeds for a live TV interview. I felt so proud lining up alongside my team-mates, singing the national anthem. I remember the game being played at such a high tempo with a lot of passion and pride at stake. Whilst the score went against us, I came off the pitch satisfied I’d given my all for Queen and country.

How did you approach training and playing during Ramadan?

I managed it, but with great difficulty – those who know me know I have quite an appetite!
Over the years, I learnt various ways to manage Ramadan. As Muslims, we are required to fast from sunrise to sunset each day for 30 days, in addition to engaging in the religious, cultural and social activities that Ramadan represents. Primarily it’s about planning ahead, knowing what to do and having the correct mindset. With this process in mind, we are able to maintain and, in some cases, excel during Ramadan if physical training, food and fluid intake and sleep are well controlled.

How much racism did you experience during your playing career?

Unfortunately, I experienced racism on and off the pitch on more occasions than I care to remember. I also witnessed racism aimed at black players.
The majority of this was chanting from opposing supporters, but there were racist comments from opposing players too. The racism and prejudice did not stop when I finished playing. Some of those experiences were quite tame compared to the challenges that I have come up against in Rugby League development, dealing with grassroots, professional clubs and the governing body. This was more a case of institutionalised racism.
I came across a lot of colonial attitudes – “This is how we’ve always done it and we’re not going to change.”
Research has concluded that there is a small but significant problem with racism in Rugby League, accompanied by a lack of awareness of racial issues on the part of some. I can certainly vouch for this.

Tell us about the British Asian Rugby Association (BARA) and what you have achieved?

BARA was initially formed to make a strong statement and to demonstrate that Asians are just as passionate and enthusiastic about sport and rugby, provided they are given the same opportunities.
I’ve also been an ambassador for ‘Kick It Out’ (football’s equality campaign) and the National Asians In Football forum.
It was obvious that there were similar challenges and issues in Rugby League too. We dismissed the myth that Asians couldn’t play rugby by setting up the South Asia Bulls, a team made up of South Asian players, many of whom had been playing rugby for many years.
Taking the development initiative further, we formalised the South Asia Bulls to BARA in 2004, incorporating a dual-code campaign for equality and inclusion. We make sport fun and free of prejudice that can only contribute to bringing everyone together.
Now, more than ever, we need to promote positive messages about anti-racism, discrimination and other important matters such as domestic violence. BARA will continue to bang the drum for progressive initiatives such as these.

Why has there never been a big breakthrough with Rugby League and the Asian communities?

If you look at most sport governing bodies, they have similar issues of engagement with Asian communities. There are many factors explaining this.
But in Rugby League, I think our appeal has declined in recent years. There are no genuine superstars like the Hanleys or Offiahs who could cut through and appeal to all communities.
The dismantling of BARLA hasn’t helped. But there have been pockets of good work being done, and credit must be given to those who are genuinely making an effort. I remember working with Emma Rosewarne, who was recently and deservedly inducted to the RFL Roll of Honour. Emma understood the importance of engagement and reaching out.
In addition, there have been anti-racism campaigns like ‘Tackle It.’ There was another initiative that worked with faith communities and a research study by Leeds Metropolitan University – and other positive projects with positive outcomes.
However, it seems that when we had an opportunity to further sustain the good work, we just did not capitalise on it. Ever since the formation of BARA, we have been highlighting and promoting Asian players as positive role models. We are often told there aren’t many Asian players playing the game, but there have been many like Junaid Malik, the legendary Elland player and former BARLA international. Being a successful businessman and qualified solicitor kept him out of the professional game.
Other excellent players who played in the professional game or at the highest amateur echelons include Safraz Patel, Amraz Hamid, Saqib Murtza, Danny Rasool, Imad Nasir, who can now be seen on the Huddersfield Giants touchline in his role as doctor, Syed Ali, Gurjinder Singh and Keith Sandhu, who went on to manage the Great Britain Pioneers.
Many Asians have played Rugby League, but we have missed opportunities to celebrate what these players have contributed to the game.
On the business side of things, prior to Omar Khan taking over at Bradford Bulls, there was the ABC Consortium made up of very successful Asian businesses, including the Malik Group, which wanted to invest in the club. Finance wasn’t an issue with this group, and they had people from a Rugby League background who would have led the consortium. Junaid Malik would have been the chief executive. Junaid lives and breathes Rugby League and would have done a great job in the role. The Bulls coach at the time, Mick Potter, came to meet us and we discussed players and contracts. It was such a shame the ABC Consortium was overlooked, and I think it was because Omar was happy to forgo the club’s share of the TV money.

You signed for Leeds in 1986. What are your memories of your time there?

Growing up a stone’s throw from the famous Headingly stadium, it was a dream come true to sign for my hometown club at 17. There was a galaxy of star players including our kid, Tony, and his best mate Errol Johnson. I played under the great Peter Fox, undoubtedly the greatest coach of them all.
I was selected for Yorkshire Colts and then Great Britain Colts. Most of my game time for Leeds was spent in the reserves. That said, we had a great bond between the players, very good crowds who were rewarded with major trophies each year. One year we won all four trophies on show.
The highlight of my time at Leeds was playing alongside some great players, none more so than my childhood hero, the legendary John Holmes. I also had a very special relationship with the Chairman at the time, Harry Jepson OBE. I spent four years at Leeds under four different coaches – Peter Fox, Maurice Bamford, Malcolm Reilly and David Ward. Each had their own style of coaching and ways of dealing with players.

Click here for part two of this interview, in which Ikram discusses life at Featherstone, London, Huddersfield and Hunslet, his time in prison in 1996 and his Rugby League development journey that led him to the Vatican in 2016, where he met the Pope.