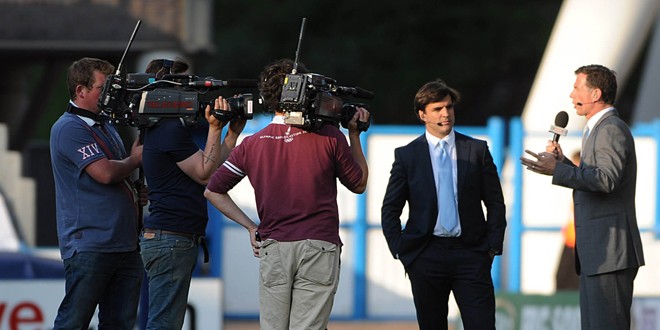 So when the RFL agreed a five-year contract with BSkyB for that amount, and persuaded the Super League clubs to give their backing to it last Wednesday, most of them didn’t need much persuading, particularly when told they would each receive £300,000 into their bank accounts within a couple of weeks.

Only one club voted against, and I understand that was Salford Red Devils, whose Chairman Marwan Koukash subsequently congratulated BSkyB on his Twitter account for acquiring rights to the Greatest Game for eight years.

Wigan Chairman Ian Lenagan, as he reveals in this week’s League Express, has grave reservations about the process whereby the new contract was negotiated.

Even so, the announcement of the new contract gives our sport, on the face of it, a high degree of security for the next eight years.

I’m glad to say that some details of the deal have fallen through my letterbox, although not, I hasten to add, from Mr Lenagan. But I am delighted to be able to reveal them here.

The five-year deal breaks down as follows:

The amount being paid for club and international matches will be £182,200,000 in total.

For that, Sky Sports will broadcast 71 Super League games per season, 17 Championship games and one Championship one game, while they will also broadcast eleven Challenge Cup games.

BSkyB will also pay another £17,800,000 during the course of the contract, and that money will be paid for coaching and to the clubs’ charitable foundations, with the first payment of £100,000 per club being made in July.

Under the terms of the new contract the annual payment to Super League clubs will rise to £1,825,000 per club, which will just about cover the salary cap.

The Championship One clubs will each receive £75,000.

It’s a new world, and it will be interesting to see how it all unfolds.

What do you think? Should Super League have followed Ian Lenagan’s advice and opted for a shorter extension or for a larger amount of money? Let us know your thoughts by commenting below. The following video shows Sky’s teaser for the season ahead.