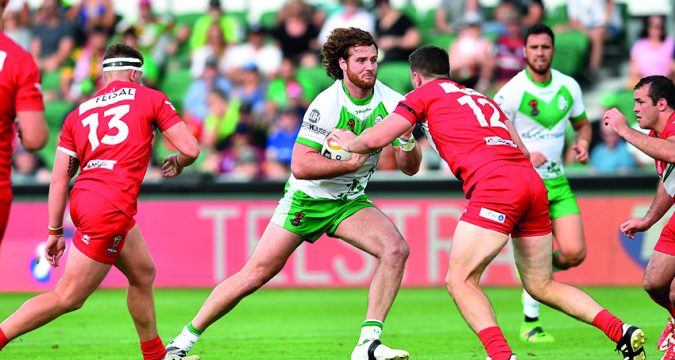 Ireland concluded their Rugby League World Cup 2017 journey with a sharp 34-6 win over Wales at Perth Rectangular Stadium on Sunday.

Wales were restricted to just one try for the third consecutive game as the Irish ran away with their second win from three group games.

The Wolfhounds knew their fate before kick-off after Papua New Guinea’s victory over the United States earlier in the day meant they wouldn’t be able to progress through to the quarter-finals.

Despite doing everything possible to let Wales into the game early, including making eight errors and completing just 65 percent of their sets in the first half, Ireland took an imposing 22-0 lead before the break.

Able to control the tempo of the contest for most of the opening 40 minutes even with their mistakes, Ireland made the chances they had count – scoring four tries and out-classing Wales.

The Wolfhounds’ 62 percent share of possession forced Wales into continual defence in the 30-plus degree heat of Perth and their trend of missing tackles continued, amassing 30 in the first half alone.

Wales composed themselves in the 20 minutes after halftime and in the 58th minute, they had their first try through Ben Morris.

Stand-in halfback Josh Ralph was a late addition to Wales side during the week, but his cut-out pass to set up Morris and Wales’ third try of the tournament was sublime.

In the 66th minute, Wales gave up their seventh penalty of the day and the advantage was pounced upon by Ireland. Oliver Roberts secured a brace of tries just a few plays later to extend the lead to 26-6.

Liam Kay finished off a sweeping move the left for Ireland in the 74th minute, scoring his third try of the World Cup and moving the scores to 34-6.

Some entertaining portions of play rounded out the game, but in the end, it was all Ireland who finished their campaign on a high beating their geographical neighbours.

Full match reports, stats and pictures of all the World Cup matches will be in Monday’s League Express