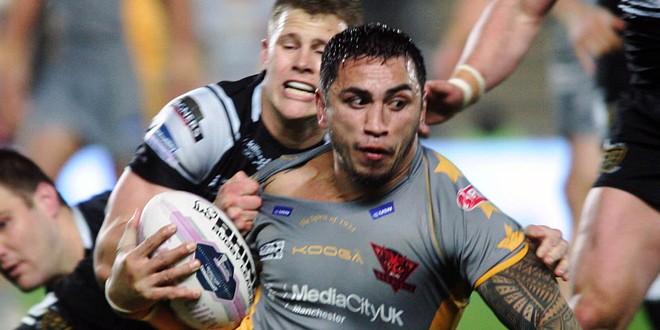 Another day, another impressive coup from Leigh Centurions.

As well as the squad they put together last year which finished top of the Championship – but admittedly fell short in The Qualifiers – Leigh have pulled out all the stops with their recruitment for 2016, going for some big names.

Dayne Weston, Harrison Hansen, Reni Maitua and Cory Paterson had already signed up for the Leigh revolution next year – but today they confirmed their most significant capture yet.

Rangi Chase is officially a Leigh player, joining on a two-year contract to strengthen Paul Rowley’s squad further as they look to make a real go of trying to get promotion next year.

And with these latest signings, is it safe to say Leigh’s squad is now ready to play in Super League – and is their squad Super League standard?

The increases to the Championship salary cap have helped their cause no end, clearly. The RFL are expected to confirm those changes will come in for the whole of the division, but Leigh are the first to use it to their advantage.

Weston is a player with almost 100 NRL appearances to his name, whilst Hansen is one of the most experienced and dynamic back-rowers around. He’s won Grand Finals with Wigan, and is no stranger to the big stage. Nor is Paterson for that matter, who caught the eye during a difficult year at Salford last year.

Maitua also impressed during his short-term deal at Salford, whilst before that he stood out in the Championship at Featherstone Rovers.

And although Chase is arguably the most exciting signing of the bunch, it’s what Leigh have already got which perhaps makes them such an attractive bet for promotion next season.

Micky Higham, Gareth Hock and Fuifui Moimoi have the experience already in the Leigh ranks, and there is plenty of exciting English talent around them.

Liam Kay, Gregg McNally and of course Ryan Brierley are also there – and when you add all the ingredients of Leigh’s squad together, it looks a tasty mixture for their fans to get excited about next year.

The big question is though, will they get through The Qualifiers this time?